The American Gaming Association may use a soon-to-be released film about online poker to urge federal lawmakers to legalize the game. 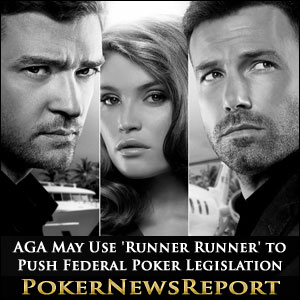 The American Gaming Association may use a soon-to-be released film about online poker to urge federal lawmakers to legalize the game.

Scheduled for release on October 4, “Runner Runner” is a Twentieth Century Fox film that stars Justin Timberlake and Ben Affleck. The movie’s premise focuses on illegal Internet poker and the offshore operators who made a bundle operating in an unregulated market.

An email sent by AGA president and CEO Geoff Freeman to fellow AGA board members cites the opportunity to use the film in attempting to sway lawmakers into backing federal online poker efforts. The email was obtained and published by Nevada political journalist Jon Ralston.

Freeman intends to use the poker movie to “raise awareness” in the public eye about needing federal regulations for online poker to protect consumers. A Senate subcommittee recently debated the need of consumer protections in a hearing centered upon the expansion of online gambling.

The issues the AGA intends to rely on in using the movie’s plot to bring its point home include providing statistics on the number of players in the U.S. currently gambling online in an unregulated environment, urging those who see the film to access the AGA website in order to become educated about the need for regulation, and holding discussions for specific audiences following viewing of the film.

Runner Runner was written by the same script writers who penned “Rounders,” the 1998 film starring Matt Damon, John Malkovich, and Edward Norton. Rounders is held in high regard by many poker players as one of the best poker movies ever brought to the screen.

Freeman’s email asks for input from his fellow board members on their thoughts related to using the release of Runner Runner to promote the cause of online poker legislation at the federal level.