Afriat Still the Man to Catch in WPT World Championship

Eric Afriat is still a long way ahead of the rest of the field after Day 3 of the WPT World Championship, with two days left to play and 18 players remaining. 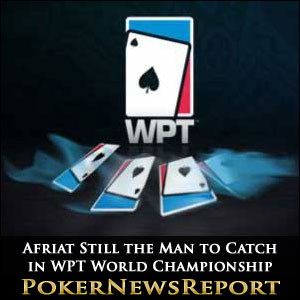 Eric Afriat is still a long way ahead of the rest of the field after Day 3 of the WPT World Championship, with two days left to play and 18 players remaining.

There are few absolute certainties in poker, but anybody betting that the runaway chip leader coming into Day 3 of the WPT World Championship – Eric Afriat – would still be around at the close of play would have collected without a sweat.

Afriat brought 1,003,000 chips into the third day of action at the Borgata Casino, Hotel & Spa in Atlantic City – almost double the stack of his nearest rival – and during a further six levels of play on Day 3, doubled his stack to 2,029,000 chips – good for a lead of twenty-five big blinds over second placed Abe Korotki (1,616,000 chips).

Day 3 of the WPT World Championship was also the day on which the money bubble burst; and, as the surviving sixty-eight players took their seats in the Borgata for level 15 (blinds 2,500/5,000 – 500 ante), they knew that thirty-two of them would be going home empty handed. Plenty of short-stacked players adopted a shove-or-fold strategy, and for many it was not such a good idea.

Brandon Steven moved all-in for his last 9 BBs in one of the first hands of the day with J♦ 10♥, and was the first player to depart when failing to improve past Corey Hochman´s pocket Aces. Matt Waxman was also reduced to his last 9 BBs when he shoved with A♦ 4♣, but he was out-kicked by Catherine Dever´s A♣ J♣, and Simon Lam had just short of 14BBs when he moved all-in with A♦ 5♦ against Eric Afriat (K♠ Q♠), and Afriat spiked the Q♦ on the River to send Lam to the rail within the first level.

Twelve players were busted out of the WPT World Championships during the first level of play on Day 3, and there was no reduction in the pace of eliminations as the blinds increased. Mike Leah was bust by WPT Caribbean Champion Tony Dunst K♣ K♦ > 6♥ 6♦, and Dunst quickly chipped up further by eliminating Jeremy Kottler A♥ K♣ > A♠ J♣.

She Lok Wong A♦ Q♥ rivered the Q♣, but it was not enough to improve past Jeff Masden´s A♥ A♠, Nick Schulman flopped trip Aces to eliminate Garrett Greer (9♥ 9♦), Jeff Gross´ A♠ K♣ was not good enough to keep his tournament hopes alive against Glenn Lafaye´s K♦ K♠, and the relatively subdued Phil Hellmuth was bust short of the money when he moved all-in with A♠ 6♥ and was dominated by Byron Kaverman´s A♥ Q♠.

As the tournament approached the dinner break at the end of Level 18 (blinds 5,000/10,000 – ante 1,000), the money bubble burst when two players were eliminated simultaneously. Nick Schulman moved all-in after the flop of J♦ 10♦ 3♣ with Q♠ 9♦ for an open-ended straight draw, and he received a call from Maurice Hawkins (A♦ K♦) who had the chance of a gutshot straight flush. The board completed 2♥ / A♠ to give Hawkins a pair of Aces and send Schulman to the rail.

Meanwhile at another table, Michael Lavoie (A♦ Q♦) and Curt Kohlberg (K♥ K♠) had got involved in a pre-flop raising war which had seen Lavoie all-in and needing to improve to stay alive in the tournament. The board of J♣ 8♦ 8♠ / 6♣ / 7♣ meant that Kohlberg´s Kings prevailed, and Lavoie was also eliminated one spot from the money.

Field Reduced to 18 in Post-Dinner Blitz

With the remaining thirty-six players assured of a $30,085 min-cash, the tournament loosened up even more and was halved in size within two levels. Anthony Gregg chipped up into a good position when his A♥ A♣ held against Scott Eskenazi´s K♥ K♦, Justin Young moved towards the top of the leaderboard when his pocket Kings saw off Alex Condon (A♥ Q♠) and Ryan D´Angelo did every blogger a favour when busting Athanasios Polychronopoulos 7♣ 7♦ > A♥ J♦.

Eric Afriat moved further ahead of the field when taking down a 1.2 million pot with A♣ A♥ > Blake Bohn´s A♠ K♣, but Curt Kohlberg gave chase busting out Matt Stout J♥ J♠ > K♠ Q♥ and Abe Korotki moved into second place when eliminating Jesse Sylvia 5♦ 5♠ (flopped a set) > J♣ 7♠ (flopped two pairs).

Day 3 of the WPT World Championship concluded when Keven Stammen bust Jeff Masden in nineteenth place A♠ 9♥ > 10♦ 7♥ and, when play resumes later today, there will be twenty-two minutes left in Level 20 (blinds 8,000/16,000 – ante 2,000) with the tournament scheduled to continue until just six players remain.