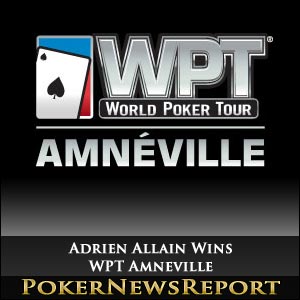 Incredible,  not just because of the manner of his victory, but also because of the way in which overnight chip leader Scott Baumstein failed to win and then how Party Poker qualifier Jordane Ouin allowed his game to fall apart right when it really mattered.

Setbacks for the Chip Leader

Baumstein later described his time at the final table as “a bad day in the office” as one player after another attacked his chip stack. As early as the fourth hand of the day Michel Konieczny had doubled up against him and, soon after, Jordane Ouin´s A♥ K♥ enabled him to also double up against Baumstein´s A♣ Q♥. Baumstein´s desire to be involved in every hand saw him lose more chips to Ouin, when the latter flopped a straight, and then lose the chip lead as first Adrien Allain doubled up with A♠ A♦ against Baumstein´s A♥ 10♥, and then Allain eliminated Arnaud Trouer with flopped trip Jacks.

Ouin Rises to the Top

Jordane Ouin catapulted himself into the chip lead with two massive back-to-back hands. First he took 800,000 chips from Allain with an intended bluff which caught the K♣ on the river to give him top pair. He then sent Baumstein on a long walk after winning a 1.5 million chip pot with a flopped pair of Queens. Scott Baumstein (Q♣ Q♠) got a few of his chips back when eliminating Michel Konieczny (A♠ 10♠) in fifth, but was himself the next player to bust after first being crippled by Allain´s trip Aces and then losing a coinflip with 7♥ 7♣ against Jordane Ouin´s K♣ J♣ – the club flush being dealt by the turn.

The departure of Scott Baumstein left Thibaud Guenegou as the short-stack of the final three players. Guenegou, who had been conspicuous by his lack of betting action throughout the day, shoved into the other two players time after time looking for the double up. Eventually he was called by Adrien Allain, and it was to prove the end of his tournament. Allain´s A♣ Q♥ paired with the Q♠ on the flop and extinguished Guenegou´s (A♥ 7♦) tournament life. Going into the heads-up, Allain (5.4 million chips) and Ouin (5.97 million chips) were fairly evenly matched, but it did not take long for Allain to take control.

One Monster Pot Leads to Victory

Adrien Allain took the first five hands of the heads-up against Jordane Ouin virtually uncontested – although in each, Allain had raised pre-flop to be called by Ouin, who then folded after Allain´s post flop raise. Ouin was leaking chips quickly, but made a monster call to level up the stacks in an A♣ 9♣ -v- J♦ 10♠ race in which neither player connected with the board. Ouin then took the chip lead with some aggressive betting of his own before giving away nearly his entire stack in the hand of the day.

Indeed it was all over the very next hand, as Jordane Ouin moved all-in with K♥ 9♦, only to be called by Allain´s 10♠ 10♦ – which held and gave Adrien Allain the tournament win, a cheque for €310,633 ($452,816) a rather sizeable trophy and entry into the $25,500 WPT Bellagio season finale in Las Vegas in December. The win was an exceptionally popular one for the local French supporters, who have waited a long time for a home victory in a major live tournament this year – even if it came courtesy of Scott Baumstein pushing the self-destruct button.