Adrian Mendoza rivered a two-outer to crack Greg Sanchez´ Aces in the final hand of the LPS Millions II and take the $115,434 first prize back to Mexico. 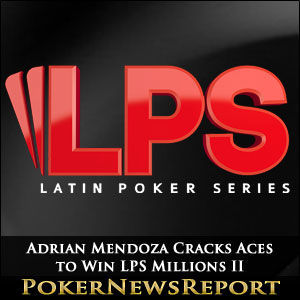 Adrian Mendoza rivered a two-outer to crack Greg Sanchez´ Aces in the final hand of the LPS Millions II and take the $115,434 first prize back to Mexico.

In comparison to the Thursdays´ and Friday´s laid-back action at the Majestic Casino in Panama, Saturday´s nine-handed final table of the LPS Millions II was quick and brutal. Going into the final table, Adrian Mendoza held a narrow chip lead over Jonathan Arthur after turning an Ace-high flush to cripple Day 1 chip leader and final table bubble boy Anthuan Hazkour.

Also at the final table were two players who had a knack of finding the right cards when they needed them – Velton Lima Gomez and Greg Sanchez. Gomez had led the LPS Millions II throughout Days 2 and 3; and went into Day 4 with a big chip lead courtesy of finding pocket Aces in the last hand on Day 3. Sanchez had escaped elimination several times by the skin of his teeth – the most recent being when rivering a King to best Igor Campana´s Ace-Ten.

The primary reason for the laid-back action over Days 2-4 was that the blinds were rolled back at the beginning of Day 2 and most players had stacks worth hundreds of big blinds throughout the three days. By the time the nine players took their seats for the final table of the LPS Millions II, the blinds were starting to catch up, and play resumed just before the beginning of Level 26 (blinds 20,000/40,000 – ante 5,000).

Consequently there was a lot of pushing or folding, with the three smallest chip stacks going into the final table being the first three players to leave – Guillermo Echevarria´s A♦ K♣ failing to improve past Ezio Fenocchio´s 10♣ 10♠, Camio Zuluaga running pocket Sevens into Greg Sanchez´ pocket Aces, and Arturo Noceda getting all-in with the better pre-flop hand, but seeing Jonathan Arturo flop two pairs to bust the Mexican in seventh place.

Returning from the first break of the day, the blinds had increased to 30,000/60,000 (ante 10,000). Greg Sanchez found “Big Slick” (Ace-King) twice in consecutive hands to double up against Ezio Fenocchio and then send Fenocchio to the rail in sixth place, after which the five remaining players agreed to a deal which would leave $24,000 for the winner.

Thereafter, the pace of eliminations from the final table of the LPS Millions II accelerated. The shortest-stacked player – Jose Severino managed to double-up against Jonathan Arturo, but then lost all his chips with Ace-Nine against Greg Sanchez´ J♣ J♠ – Sanchez now moving into a big chip lead. Arturo recovered to bust Velton Lima Gomez in fourth place with pocket Eights against Gomez´ Nine-high bluff, but then lost the last of his chips to Adrian Mendoza, when his Ace-Jack failed to improve past Mendoza´s pocket Queens.

The conclusion to the LPS Millions II final table was not long in coming. Adrian Mendoza had gone into the heads up with a 7,470,000 -v- 5,420,000 chip advantage, and the chips all went into the middle within a few hands:

On the flop of J♥ 5♣ 10♥, Adrian Mendoza bet 200,000 chips and Sanchez flat-called. Following the 5♦ on the Turn, Mendoza ramped up the aggression and made it 2 million chips to play. Sanchez responded by moving all-in and Mendoza made the call:

Greg Sanchez was a 95% favourite to win the hand and double up into a substantial lead, but the 10♦ spiked on the River to give Adrian Mendoza a Full House of Tens > Fives and enable him to take down the LPS Millions II for $115,434.