Adrian Diaz´ best ever “runneado” continued at the final table of the WSOPE Main Event to help him capture the WSOPE title and one million €uros first prize. 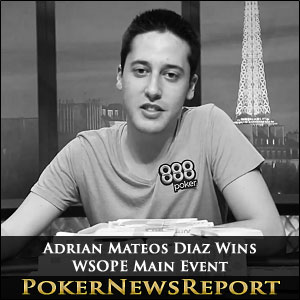 Adrian Diaz´ best ever “runneado” continued at the final table of the WSOPE Main Event to help him capture the WSOPE title and one million €uros first prize.

Adrian Diaz became only the second ever Spanish player to win a WSOPE bracelet when overcoming Fabrice Soulier in a gruelling five-hour heads-up battle to claim the WSOPE Main Event and €1 million first prize. At 19 years of age, Diaz is also the second youngest (after Annette Obrestad) to win a WSOP Main Event.

The win caps an astonishing twelve months for the youngster from Madrid, who took down the CNP770 Main Event for €32,700 last October and then won the Estrellas Poker Tour Main Event in Madrid at the start of 2013 for a further €103,053. The young Spaniard also cashed five times during this year´s PokerStars UKIPT season (including two final tables) and had three further cashes on the EPT tour.

How They Lined Up at the WSOPE Main Event Final Table

However, despite going into the final table with a significant chip advantage, winning the WSOPE Main Event was not all plain sailing for Diaz. The youngster faced challengers from the experienced Dominik Nitsche and Benny Spindler as well as WSOP bracelet winner Soulier – indeed it was Soulier who took the chip lead at the end of the first level (Level 22 – blinds 10,000/20,000 – ante 3,000) after betting Benny Spindler and Ravi Raghavan out of a substantial pot.

Spindler had been the most active player during the opening exchanges, but a failed bluff against Jerome Huge saw him fall to 157,000 chips during Level 22, and he was soon to be eliminated from the WSOPE Main Event final table when Adrian Diaz (K♣ 10♥) spiked the K♥ on the River to best Spindler´s Q♦ Q♣ and send the German to the rail in sixth place.

Fabrice Soulier and Dominik Nitsche embarked on a titanic battle throughout Level 23 – with both players enjoying alternating fortunes; but it was Adrian Diaz who took the chip lead once again before the end of the level when busting out Ravi Raghavan K♥ 8♣ (flopped two pairs) > A♠ Q♠ (missed royal flush).

Three handed play continued with Adrian Diaz (5.8 million chips) holding the lead from Soulier and Nitsche (both on 2.6 million chips); but the Spaniard failed to make any further headway against his two more experienced opponents before the dinner break. It was only when Level 25 had started that Diaz raked a huge pot with pocket Sevens after calling a Nitsche bluff that he was able to extend his lead and he finally dismissed the German in third A♠ 7♥ > 9♥ 8♦ to set the heads-up against Fabrice Soulier.

Going into the heads-up, Adrian Diaz had a 9.13 million -v- 2.12 million chip advantage against his French opponent, but Soulier chipped away at Diaz´ stack, and took a narrow lead in the heads-up when flopped trip Fours and then Turned a Straight within two hands to gain the momentum in the climax of the WSOPE Main Event.

Diaz Fights Back and Claims Bracelet

Going into the first break of the heads-up, Fabrice Soulier was the firm favourite to collect his second WSOPE bracelet of the year after having established a 7.7 million -v- 3.55 million chip lead. However, Adrian Diaz picked up a series of small pots over the next level to even up the chip counts and, just as Level 26 was coming to a close, took the chip lead again when his A♦ 10♠ out-kicked Soulier´s 10♣ 9♥.

375 players had ponied up the €10,450 buy-in for the WSOPE Main Event. The top forty players finished in the money, with the six players who survived to the final table receiving the following payouts:-