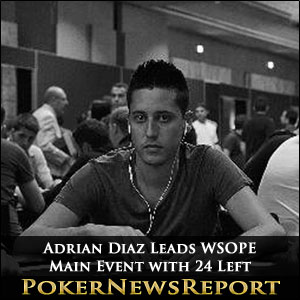 Adrian Diaz´s seat draws may have been favourable, but he also enjoyed some good fortune with the cards on Day 3 of the WSOPE Main Event. Doubling up early courtesy of an A♣ Q♦ > 7♠ 7♥ flip against Kim Sok, Diaz had sufficient chips to take advantage of the nervous play that preceded the bubble being burst (Diaz collected 200,000 chips without seeing a showdown during hand-for-hand play).

Day 3 of the WSOPE Main Event was about as intense a “bubble day” as there could be. Sixty-nine players returned to the Casino Barriere in Enghien-les-Bains for Level 13 (blinds 1,200/2,400 – ante 400) and, with just forty players due to cash, the action happened incredibly slowly.

Several short-stacked players enjoyed double-ups during the first couple of levels – notably Sam Holden (A♣ K♦ > Benny Spindler´s Q♣ Q♠), Daniel Negreanu (5♥ 5♦ > Kim Sok´s Q♥ Q♠) and Hans Vogt (A♣ A♠ > Shawn Buchanan´s A♦ Q♦) – and it was almost six hours into the day before the bubble finally burst.

Sam Holden and Daniel Negreanu both survived the bubble, but were bust in 26th position and 25th position respectively – bring the day to a close – but Hans Vogt survived the day along with UKIPT London winner Sergio Aido, who enjoyed an incredible comeback from having just 36,400 chips after losing the majority of his stack in one of the first hands of the day.

The top five on the leaderboard coming into Day 3 also made it through to the final twenty-four players that will contest Day 4. Overnight chip leader Dominik Nitsche hit a bad patch on the bubble to chip up Fabrice Soulier, when his trip Threes were outdrawn by Soulier´s Spade Flush, but recovered when flopping two pairs with A♥ 9♥ to bust Yann Dion.

Benny Spindler was also on a recovery mission after seeing his pocket Kings cracked by Flavien Guenan´s pocket Queens. However, he bounced back during the last level of Day 3 to bust Alexandre Amiel A♦ 2♥ > 7♥ 7♦ to finish the day with 331,000 chips. Ludovic Lacay, Ariel Celestino and Fabrice Soulier also remain in contention for the €1,000,000 first prize and WSOP bracelet.

Looking Ahead to WSOPE Day 4

With the remaining twenty-four players assured of a €23,750 pay day, the goal today will be to make it into the eight players that will contest the final table on Thursday. When play resumes, there will be 75 minutes remaining in Level 18 (blinds 4,000/8,000 – ante 1,000) with those most likely to feature in tomorrow´s PokerNewsReport being:-