The websites of all Las Vegas Sands casinos were down yesterday after hackers breached security systems in an attack against Sands Chairman Sheldon Adelson. 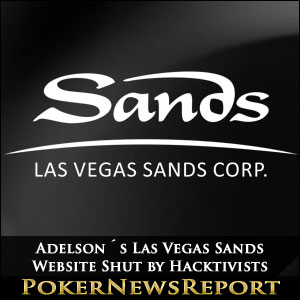 The websites of all Las Vegas Sands casinos were down yesterday after hackers breached security systems in an attack against Sands Chairman Sheldon Adelson.

Clients attempting to access the websites of the Venetian Casino and Palazzo Casino yesterday were greeted with images of Sands CEO Sheldon Adelson posing with Israel’s Prime Minister Benjamin Netanyahu and a message condemning the use of weapons of mass destruction.

Before being removed, other images on the website home pages showed flames replacing map locations of Sands Casinos around the world and a message – signed by the Anti WMD Team – stating  Damn A, don’t let your tongue cut your throat.

Sands Casino websites in Bethlehem, Pennsylvania, Singapore and Macau were also taken down after the attack due to the home pages of the sites being compromised and – instead of seeing the traditional home page greeting – visitors could see a list of confidential employee information; including their contact information and social security numbers.

The attack – which is being investigated by the Nevada State Gaming Control Board and the FBI – would appear to have originated from a group of “hacktivists” opposed to Sheldon Adelson´s stance on Iran, and has nothing to do with the Sands´ chairman campaign against online gambling.

Adelson is a passionate supporter of Israel – which has long argued that Iran plans to launch a nuclear strike on the country – and last year, during a speech at the Yeshiva University in New York, Adelson suggested that the US should drop a nuclear bomb in an Iranian desert as a show of strength, and then say (to the Iranians):

See! The next one is in the middle of Tehran. So, we mean business. You want to be wiped out? Go ahead and take a tough position and continue with your nuclear development.

Adelson´s comments were widely criticised – even by members of his own faith – and it seems they struck a chord with hacktivists who used yesterday´s attack on the Sands Casino websites to display their displeasure towards the eighty-one year old multi-billionaire.

Confusion Over What Data Was Accessed

A spokesperson for the Las Vegas Sands reportedly said the company was working with investigators to determine who was behind the hacking and to assess what data had been accessed. He refused to answer any questions about whether customer credit card records had been breached in the attack; although it is understood that Sands employees were still unable to access their email accounts.

Conspiracy theorists have already started to suggest that Adelson´s anti-online gambling lobby group – the Coalition to Stop Internet Gambling (CSIG) – will spin this attack in their favour, and use it to demonstrate the vulnerability of the Internet and the inability of online gambling operators (including Adelson´s own Sands Casinos) to prevent terrorists and criminals from accessing personal data. It has also been suggested that Adelson himself orchestrated the attack to make a point.

Other Las Vegas-based casino companies reported no problems with their sites.