A new bill proposing the federal banning of online gaming has been identified as being drafted by a representative of Sheldon Adelson´s Las Vegas Sands Corp. 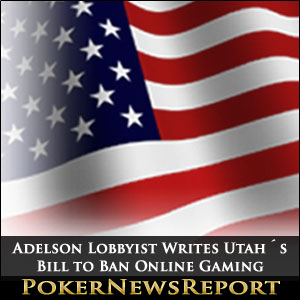 A new bill proposing the federal banning of online gaming has been identified as being drafted by a representative of Sheldon Adelson´s Las Vegas Sands Corp.

A bill proposing to ban online gaming throughout the US, supposedly drafted by Congressman Jason Chaffetz (R-Utah), has been found to be the work of Darryl Nirenberg – an anti-gaming lobbyist who represents Sheldon Adelson´s Las Vegas Sands Corporation.

The bill – “The Internet Gambling Control Act” – aims to ban all forms of Internet gambling, including online poker, state lotteries and sports betting – but not horse racing, as a nod to Republican Leader Mitch McConnell from Kentucky – and will run in tandem with Senator Lindsey Graham´s (R-SC) Wire Act “fix”, which is being heavily supported by Sheldon Adelson´s Coalition to Stop Internet Gambling.

The proposed legislation seeks to stop all forms of Internet gambling (except horse racing) with immediate effect in order for a study to be conducted into issues such as terrorism financing, money laundering, cyber-crimes and online gambling by minors.

Adelson/Nirenberg/Chaffetz also proposes that the wording of the Wire Act be amended to include any transaction conducted over the Internet, and that the existing term any sporting event or contest be clarified to include games of chance, games of skill, or events in which a participant could win a lottery or other prize (except for horse racing).

How We Know This is Adelson´s Doing

Inasmuch as any proposed anti-igaming legislation is always suspected to have an Adelson connection, the proposed “The Internet Gambling Control Act” was published online by Washington journalist Steve Tetreault.

Tetreault highlighted the fact that the properties of the document clearly indicated that the legislation was drafted by Darryl Nirenberg – a partner in the lobbying company of Steptoe & Johnson who recently brought Sheldon Adelson´s Las Vegas Sands Corporation over to his new employers from Adelson´s previous “publicists” Patton Boggs.

Tetreault reported that Congressman Jason Chaffetz was unavailable for comment when his office was approached yesterday for a statement on the Adelson “connection”, but he did extract a comment from Nevada´s Republican representative Dan Heller – who has also been aiming to restore the Wire Act, but with exceptions for online poker (instead of horse racing?). Heller said he wanted to see what Chaffetz and Graham proposed in their drafts and go from there.

What Chance of Success Does the Bill Have?

Sheldon Adelson has vowed to spend whatever it takes to prohibit online gambling in the US despite having made a $28.5 billion fortune from his brick-and-mortar casinos in Las Vegas. Pro-gambling lobbyists fear that his generous contributions to Republican Party funds will have a significant influence on the bill´s chances of success – which would undo all the progress made so far in Nevada, New Jersey and Delaware.

The possible stumbling block for Adelson´s plans could come in the revenues that have been generated from online poker in the three regulated States – particularly in New Jersey – and also from nationwide objections to prohibiting online lotteries and the risk that online gamblers will look to offshore, unregulated sites for their online gambling activities.

A representative from the pro-gambling Coalition for Consumer and Online Protection  – Mary Bono, a former Republican Congresswoman from California said Banning all online gaming nationwide, as this bill effectively does, would put American consumers at serious risk [from offshore, unregulated gambling]. Her group advocates legalized online gambling which is regulated in a similar way to Nevada´s model to protect online gamblers.

Is this the end for online gambling in the US, or will some compromise be reached? As one spokesperson said All bets are off