UB.com have announced the re-signing of UB Team Pro Adam Levy, with a new deal extending his contract for two years. Joining Team UB at the end of 2008, the previous two years have been very… 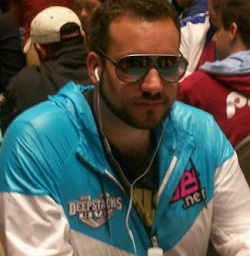 UB.com have announced the re-signing of UB Team Pro Adam Levy, with a new deal extending his contract for two years. Joining Team UB at the end of 2008, the previous two years have been very successful for both parties, so Levy wanted to continue the arrangement.

Commenting on the new 2 year deal with UB.com, Levy said:

“UB has been my home for the past two years and I’m looking forward to another two years with them,” Levy stated during the announcement. “They have really great tournament structures and schedules and I’m excited to see what other great changes are coming to the site.”

Levy’s first introduction to a card game was Magic: The Gathering, which he regularly played with friends. Then one day, it was mentioned that he should give poker a go, and he went from playing collectible card games to a game which has earned him millions of dollars.

Adam who goes by the handle “ROOTHLUS” in the online poker world has made a name for himself for possessing that attribute on the virtual felt. The 28 year-old from New York has already accumulated $1.5 million from live tournaments and more then $3 million from online tournaments.

Many players would have first heard of Adam “Roothlus” Levy at the 2008 WSOP Main Event, as he was the target of a Hellmuth blowup at the feature table. It’s unclear why Hellmuth berated Levy for five minutes. After all, donkeys don’t win over $4.5 million at the tables in just over five years.

One of his best tournament results was the deep run he made in the 2010 WSOP Main Event. In that tournament, he managed to outlast a field of 7,319-players to finish in 12th place for a $635,011 payday.

With Phil Hellmuth and Annie Duke parting ways, UB Poker lost the two biggest names representing their online poker room. Evidently, the poker room was looking to go in a new direction and looked to fill the void left by the departure of Hellmuth and Duke by creating a new team of very talented up and comers who online players can recognize.