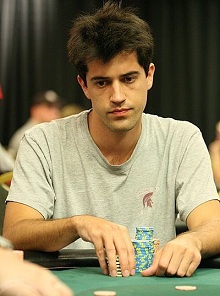 PokerStars which is number one on most poker players list of best poker rooms are currently holding their annual PokerStars Caribbean Adventure tournament series in the Bahamas and Day 2 has now been completed.

A total of 1,560 players entered the $10,000+$300 buy-in Main Event and the field was quickly whittled down to 645 players who recommenced play yesterday on Day 2. The day saw six levels played, the money bubble burst, and a total of 173 players survived to stay in the hunt for first-place prize money of $2.3million and the title of 2011 PokerStars Caribbean Adventure Main Event Champion.

Harrison Gimbel who won this event last year began Day 2 with a small stack and couldn’t manage to make any moves and found himself eliminated. There were quite a lot of big-name eliminations though with several Team PokerStars Pro’s hitting the rail including; Liv Boeree, Joe Cada, Dario Minieri, John Duthie and Nacho Barbero.

Marco Johnson was the unlucky player to be eliminated on the bubble at the hands of William Reynolds. Johnson decided to push all-in for his remaining 26,000 in the small blind holding k9 and Reynolds instantly called in the big blind holding A9. After the media gathered around the flop of 972 was revealed leaving Johnson to hope for a King or runner-runner clubs to give him a Flush. The turn of 10 gave him hope however the river card of Q crushed his hopes and he was eliminated in 233rd place, leaving the rest of the players in the money.

Day Three will kick off at 12pm EST and many high-profile poker players still remain including 2003 WSOP Main Event Champion Chris Moneymaker, Eric Buchman who finished fourth in the 2010 WSOP Main Event, David Sands who is a prolific online poker tournament speciliast, and many others.

As always, stay tuned to PokerNewsReport.com for the latest information from the PokerStars Caribbean Adventure.