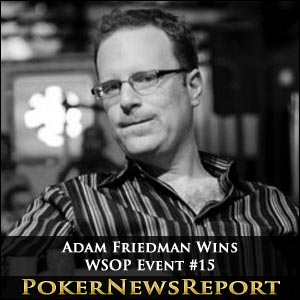 The 30-year-old pro – who now lives in Vegas – ultimately beat one-time bracelet winner Todd Brunson in their heads-up encounter that left the disgruntled runner-up with $166,269.

Brunson’s dissatisfaction as collecting a rather handy cheque was almost certainly increased by holding the chip lead for much of the heads-to-head, only to lose out to Friedman.

Friedman brought it in, Brunson completed, and then Friedman called. Brunson had (x-x)/10♥ 7♦ J♠, while Friedman held (x-x)/2♣ 5♦ Q♦. Brunson then check-called a bet on fourth street, as well as fifth street. Then, after a succession of raises, Brunson shoved all-in to show his 10♣ 3♣ hole cards.

In what was a terrific final table, Phil Ivey picked up $34,595 in seventh place, while Bryn Kenney collected $27,012 doe exiting in eighth.