The first of Dusk till Dawn´s £50,000 Summer Deepstack tournaments saw Adam Brown come from behind in the heads-up against Tim Slater to score a £15,000 victory. 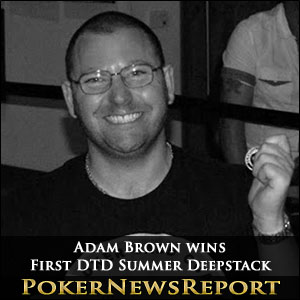 The first of Dusk till Dawn´s £50,000 Summer Deepstack tournaments saw Adam Brown come from behind in the heads-up against Tim Slater to score a £15,000 victory.

The format of Dusk till Dawn´s Summer Deepstack tournaments is not unlike the recently announced Grand Prix – where players have the opportunity of playing Day 1 of the event online or live at the club, and the top 10% of players from each Day 1 take their chip stakes into Day 2.

An incredible 642 players took part in the £100 + £15 buy-in event, smashing the £50,000 guaranteed prize pool and ensuring that each of the 62 players who took their seats for Day 2 of the Summer Deepstack was assured a minimum cash of £300.00 (dual qualifiers had their stacks merged).

Heading the way when the chip stacks from the four Day 1s were combined was birthday girl Suzanne Gilbert, who had built her original stack of 30,000 chips into a round million and who had a substantial lead over DTD regulars Gary Payne (698,000 chips) and Thomas Somerville (617,000).

Action gets Faster as Blinds Increase

By the time the third level of the day started (blinds 5,000/10,000 – average stack 420,000), 45 players remained. Suzanne Gilbert still led the field, but was being closely pursued by Payne and Somerville, Day 1A chip leader Tommy Bingham and Tom Rutter.

Thomas Somerville briefly took the chip lead when he bust out Stanley Wallace in 38th (K-Q > A-7), but Suzanne Gilbert re-captured the chip lead with the elimination of Gavin Roberts in 31st (A-Q > A-J). At this point, Suzanne had built a lead of more than ½ million chips over her opponents, but lady luck was not to be on the side of the birthday girl for much longer.

First, Thomas Somerville bet Suzanne Gilbert out of a million chip pot, before Tommy Bingham bluffed her out of another 500,000 chips. Finally, she shoved with pocket Fours on a flop of J-2-5 and was called by Somerville, who has holding pocket Aces. Suzanne Gilbert finished the tournament in 20th place.

With blinds now up to 30,000/60,000, the play became even more frenetic. Mohammed Sadiq knocked out Raj Dhiri in eighteenth (A-7 > A-Q) when flopping a Seven, and Adam Brown made an appearance on the radar when busting Andy Subir in seventeenth (A-K > A-J).

Tommy Bingham took his stack to over 2 million chips when he knocked out Jimmy Braddick in fifteenth (A-K > A-8), but was passed at the top of the leaderboard by James Conway (8-8) who eliminated both Tom Rutter (Q-Q) and Raghubinder Aujla (also Q-Q) when rivering an Eight for a set.

The final table was set when Levan Reid knocked out Mohammed Sadiq in tenth (A-K > A-Q) and at that point, with blinds about to increase to 40,000/80,000, the approximate chip counts looked like this:-

Short-stacked Ravi Chahal was soon the first player to leave the final table of the DTD Summer Deepstack, when he jammed his chips into the middle with A-8 and James Conway in the Small Blind held with A-K.

Anthony Arlott was soon following Chahal to the Cashier´s desk in a three-way pot in which Arlott shoved with A-Q, James Conway re-shoved with A-K and Tim Slater called off the last of his chips with J-J. A Jack on the river bust Anthony Arlott out in eighth and took Tim Slater to the top of the leaderboard.

Within a few hands Tim Slater was a massive chip leader. He first crippled Jordan Burnett in an A-A > J-J pot and then finished the job in a K-K > A-6 confrontation which, after the Kings had held, left Tim Slater with around 7 million of the 19 million chips in play as the tournament went six-handed.

Thomas Somerville and Tommy Bingham were sent to the rail in sixth and fifth places respectively. Thomas Somerville (Q-10) thought he was good for a double-up when he made a pair on a Queen-high flop, but James Conway (7-7) had hit a set of Sevens and Somerville was out. Tommy Bingham (A-6) left the game in fifth after trying to steal the blinds from the button and running into the pocket Aces of Tim Slater.

Conway and Slater were then involved in the two biggest hands of the DTD Summer Deepstack tournament. In the first, James Conway was forced out of a massive pot after Tim Slater turned a set of Jacks, but in the second James Conway (J-J) moved into the chip lead when rivering a Jack to best Slater´s flopped two pairs.

Brown Busts Conway but Has Work to Do

Tim Slater chipped back up into the lead when he eliminated Levan Reid A-Q > J-J (Queen paired on the flop) and Adam Brown managed a double-up against James Conway (3-3 > A-9) when he flopped a Three for a set. James Conway wanted revenge when he shoved all-in with J-4 to attack Adam Brown´s blinds (now 80,000/160,000), but Brown woke up to K-10 and rivered a Ten just for good measure to bust Conway in third.

Going into the heads-up, Tim Slater had a substantial 13 million -v- 6 million chip advantage, but lost a 5 million chip pot almost immediately when Adam Brown rivered an open-ended straight against Slater´s flopped pair of Queens. Tim Slater fought back and levelled the chip counts when he rivered a flush, but the game was about to reach its conclusion when a massive pot developed on the flop of A-J-9. Tim Slater thought he was good with J-8, but Adam Brown held A-8 for the top pair to take more than 80% of the chips in play.

A Cooler for the Summer

When the end came, it was a brutal beat for Tim Slater. Adam Brown raised pre-flop to 500,000 and Tim Slater made the call. Both players checked the flop of K-4-4, but Tim Slater became the aggressor on the Queen turn and raised 700,000.

Brown called, but Tim Slater had not finished. He shoved another million chips into the middle after a Deuce on the river, to which Adam Brown announced he was all-in and Tim Slater made the call.

Tim Slater turned over A-4 for flopped trip Fours, but Adam Brown showed pocket Kings for a flopped set and became the first DTD Summer Deepstack winner of 2013.

Due to the success of this first DTD Summer Deepstack, Dusk till Dawn have announced they will be running a second event immediately, but with four online Day 1s (from tonight until Thursday) and two live Day 1s at the Nottingham venue on Friday and Saturday. Again the guarantee will be £50,000 and – again – you can find out who wins the event by following PokerNewsReport.