Americas Cardroom has announced an OSS CUB3D trio of online poker series that will feature a $1 million guaranteed tournament to be played on September 4th. 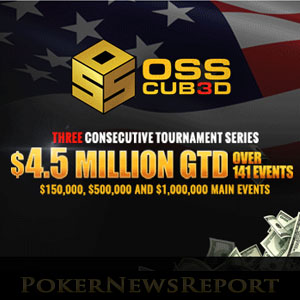 Americas Cardroom has announced an OSS CUB3D trio of online poker series that will feature a $1 million guaranteed tournament to be played on September 4th.

The Online Super Series (OSS) has been a feature series in Americas Cardroom´s calendar for nearly five years. More recently, the Mini Online Super Series (MOSS) was created to give players with limited bankrolls the opportunity to compete in valuable online poker tournaments.

Now Americas Cardroom has created the Bigger Online Poker Series (BOSS) – a tournament series targeted at high rollers – and will be hosting all three series back-to-back between Sunday August 14th and Sunday September 11th in a promotion called OSS CUB3D.

Each of the three series will have its own Main Event, but the one that will command the most attention is the OSS Main Event on Sunday September 4th – a $540.00 buy-in tournament with a guaranteed prize pool of $1,000,000!

The trio of back-to-back online poker tournaments starts with the Mini Online Super Series on Sunday August 14th. Over the next week, the site will be hosting 47 tournaments with buy-ins as low as $0.06 offering more than $500,000 in guaranteed prize pools.

The schedule includes a good variety of NL Hold´em and PL Omaha events, including mega stack, hyper-turbo and knockout tournaments. There are also two “Micro High Roller” tournaments with buy-ins of $55.00 in addition to the $150,000 guaranteed Main Event.

One of the keenly fought tournaments in the series is expected to be the “Passport Event” (Event #45). The Passport Event guarantees five packages of tournament entries in the Online Super Series – including a seat in the $1 million guaranteed OSS Main Event.

The 77 tournaments of the Online Super Series get underway on Wednesday 24th August with a $100,000 guaranteed tournament setting the scene for what is to follow. Over the next ten days, almost $3 million will be up for grabs in a wide range of events that includes a $1,000 buy-in Cage event and a “Beast Tournament” giving away ten packages to the Punta Cana Poker Classic in October.

The $1 million guaranteed OSS Main Event on Sunday September 4th has a start time of 4:00pm (EST) and will likely have an extended late registration period to give the event every chance of hitting its guarantee. It can also be expected that there will be an extensive schedule of satellites leading up to the event in order to qualify as many players for the $1 million guaranteed tournament as cheaply as possible.

In addition to the events already mentioned, OSS will include a $300,000 guaranteed “Sunday Special” on 28th August, a $20,000 guaranteed NL Omaha Hi/Lo event on Wednesday 31st August, and a BOSS Passport Event on Sunday 4th September guaranteeing a minimum of two tournament entry packages to the feature events in Part 3 of OSS CUB3D – the Bigger Online Super Series.

The Bigger Online Super Series runs from Wednesday 7th September to Sunday 11th September and has been specifically designed to cater for high rollers. Only one of the 16 events has a buy-in of less than $109.00 and five of the events have guarantees in excess of $100,000 – including the $2,100 BOSS Main Event that is guaranteed for $500,000.

The regular “Sunday Special” and “PLO Sunday Special” will have their guarantees enhanced as part of the BOSS series and, on Friday night, there is a $1,050 buy-in “Super Knockout” event that will be well worth watching if you do not have the spare change to afford the buy-in!

The Bigger Online Super Series is guaranteed to pay out more than $1.5 million, plus however much is on the tables in the $5,100 buy-in “Cage” event on Wednesday 7th September – the “Cage” being a cash game with an MTT format, in which players start with 1,000 chips to try and survive five hours of action. Once the five hours are up, surviving players convert their chips back into cash.

You do not have to wait until August 14th to play in a valuable tournament at Americas Cardroom. Every Sunday the site hosts a $115,000 guaranteed “Sunday Special” – the most valuable online poker tournament for players located in the States. In recent weeks the tournament has smashed its guarantee (last night it topped $150,000) indicating just how popular Americas Cardroom has become in recent months.

If you are not yet playing at Americas Cardroom, the site is offering a valuable first deposit bonus of up to $1,000 as part of its Welcome Package. New players also qualify for up to twenty days of free Jackpot Poker when they register an account using the Americas Cardroom bonus code “[bonuscode room=”americascardroom”]” and entry into up to four $250 New Depositor Freeroll tournaments. You can find out more about the Welcome Package and the opportunities that exists at the site by reading our [geolink href=”https://www.pokernewsreport.com/americas-cardroom”]review of Americas Cardroom[/geolink].