ACR Opens the Door to the Cage – Will You Enter?

Americas Cardroom (ACR) has announced an exciting high stakes cash event for Wednesday October 8th, but will the stakes be too high for you to enter The Cage? 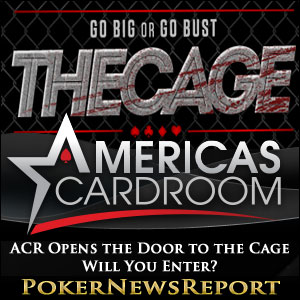 Americas Cardroom (ACR) has announced an exciting high stakes cash event for Wednesday October 8th, but will the stakes be too high for you to enter The Cage?

The Cage is an innovative new event being hosted by one of the leading US-facing poker websites – Americas Cardroom- and, although being widely promoted as a cash game, the event takes the format of a timed-tournament – played over three hours with ever-increasing blinds.

At the end of the three hours of action, players who have survived the intensity of the Cage will be able to exchange their remaining chips for their cash equivalent. With a buy-in of $5,000 for 5,000 chips, each chip has the value of a dollar, and there could be some substantial bankrolls won and lost!

Peeking Inside the Cage

Details of the event have just been released today, and – at first glance – it looks pretty awesome. The format of the event means that there will be no hiding place for players, who either have to get involved in the action or suffer the consequences.

There is no late registration, re-entries or re-buys allowed, so once you are out, you are out; and, at the end of the three hours, all the surviving players will have the value of their chip stacks credited into their Americas Cardroom account on a chip-per-dollar exchange rate.

Getting Into the Cage Through the Backdoor

Americas Cardroom acknowledges that not all its regular players will have the bankroll to fork out a $5,000 buy-in, and so have developed a comprehensive satellite schedule to allow lesser mortals to enter into combat with some of online poker´s big guns.

Starting today (Friday), a series of sub-qualifiers will be hosted on Americas Cardroom with buy-ins of just $1.50 and $5.00. The winner(s) of these tournaments will go forward to a daily $30.00 buy-in tournament which then leads on to a weekly final.

The weekly final (played on Wednesday´s at 19:30pm EST) can also be bought into directly for a buy-in of $300.00, and guarantees at least one seat in the Cage. However, if you win a seat in the Cage you will be expected to play in it. There are no cash alternatives and the seat is not transferable!

Meet and Beat Pros in the Cage

A spokesperson for Americas Cardroom has hinted that a number of well-regarded online poker professionals have shown interest in taking part in the event. In a press release announcing The Cage, ACR´s Michael Harris said – The Cage is already gaining the attention of some Texas Hold’em powerhouses and there are likely to be some big reputations put on the line.

Without indicating who these powerhouses may be, Harris commented We´re raising the stakes with an unbelievable poker cash game that´s designed for players who are in it to win it.

Whoever turns up to ground and pound the online poker tables on October 8th, the event will certainly make entertaining viewing for those without the bankrolls to enter directly or who fail to qualify.

We guess that most players that can afford a $5,000 buy-in for ACR´s Cage can also afford to pop round to their local electrics store and buy a computer with a Windows operating system, but if don´t have that kind of money, you should have a go at qualifying for The Cage @ ACR.