Last night Absolute Poker reached a long overdue agreement with the US Department of Justice (DoJ) which was to pave the way for the return of funds to US players. However, it has not been stated how long it will be before that happens. 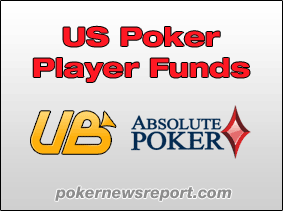 Last night Absolute Poker reached a long overdue agreement with the US Department of Justice (DoJ) which was to pave the way for the return of funds to US players. However, it has not been stated how long it will be before that happens. Blanca Gaming, which also owns online poker site Ultimate Bet, has formally agreed to close all Stateside operations. They have also refrained from requesting the return of their main domain names; www.AbsolutePoker.com, www.UltimateBet.com and www.UB.com. Their aim is to officially abandon the core business, in the hope that prosecutors will be persuaded to release player funds. However, the Department of Justice has shown no haste is returning monies back to the players.

Remaining positive, Absolute Poker have said that this represents a step in the right direction. It will allow the company to begin collecting player funds from third party processors, with the eventual goal of handing the money back over. Bank Rome LLP (the company’s US attorneys) will continue to discuss the situation with United States authorities in order to smooth the way for the final transfer of frozen fund balances. “This remains our highest priority” said a company spokesperson. “We will continue to update our players and the poker community, as we move forward to resolve outstanding issues.”

Like fellow online poker sites PokerStars and Full Tilt Poker, Absolute Poker was asked to hand over millions of dollars after the seizure on their sites on April 15th, dubbed ‘Black Friday.’ The reason for the delay in pecuniary return comes on the part of the US attorney’s office, who believe that company’s total liability may now exceed their present worth. This is including player deposits, and explains why the accounts have been frozen for the time being.

PokerStars, Full Tilt, Absolute Poker and Ultimate Bet continued to operate after the Unlawful Internet Gambling Enforcement Act (UIGEA) was passed in 2006 by George W Bush. This forced most online poker sites, inducing all European based gaming groups, from operating in America. However, a few defied the Act, stating that poker depends more on skill and mental stamina than luck, and is therefore not strictly “gambling.” Over 50,000 professional online poker players have now been made redundant in the US, although a few poker sites continue to provide online poker to the people of America beyond the startling events of Black Friday.

76 bank accounts in 14 countries have now been frozen, including an estimated $500 million in player funds. Prosecutors in New York are pushing for jail sentences for the 11 defendants, which include the founders of Absolute Poker, Full Tilt, PokerStars and Ultimate Bet, as well as executives. They are charged, among other offences, with money laundering and bank fraud.