Brent Beckley, co-founder of Absolute Poker, has pleaded guilty to conspiracy charges stemming from the Black Friday indictments in a myriad of allegations. 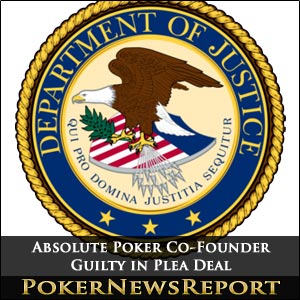 Brent Beckley, co-founder of Absolute Poker, has pleaded guilty to conspiracy charges stemming from the Black Friday indictments that named 11 individuals and the three top online poker sites in a myriad of allegations that forever changed the landscape of the online poker industry, it was reported by the Associated Press.

In his role with Absolute Poker that included directing the process of payments, Beckley admitted that “it was illegal to accept credit cards so that customers could gamble on the internet.” The 31-year-old, who is expected to receive a prison sentence of approximately 18 months for his plea deal, also added that he “knew that it was illegal to deceive the banks.” Sentencing is scheduled for April 19, one year and four days following the U.S. Department of Justice (DoJ) filing the charges against PokerStars, Full Tilt Poker and Absolute Poker, as well as the ten other individuals.

Beckley’s plea deal is the second among the named defendants. The first such plea agreement occurred in May when Bradley Franzen, allegedly acting as a payment processor, agreed to forego a trial and cop a guilty plea in hopes of a reduced sentence. Franzen reportedly owned a company that facilitated the processing of customer payments. Upon being contacted in 2009 by an online poker operator, Franzen admitted to lying to bank officers and creating phony websites and companies to conceal payments. Franzen has not yet been sentenced. His plea agreement calls for him to cooperate with prosecutors and testify against others named in the indictment, if need be. Typically, sentencing in such matters is delayed until the allegations against all defendants has been resolved.

Among the charges Beckley faced before working out a plea deal with prosecutors were the operation of an illegal gambling business, conspiracy to commit wire fraud and bank fraud, conspiring to launder money, and conspiring to and actually being in violation of, the Unlawful Internet Gambling Enforcement Act (UIGEA). Another Absolute Poker co-founder, Scott Tom, faces similar charges, but doesn’t appear to have been apprehended.

Federal prosecutors charge that Tom, Beckley and other Absolute Poker representatives “arranged for the money received from U.S. gamblers to be disguised as payments to hundreds of non-existent online merchants purporting to sell merchandise such as jewelry and golf balls.” The allegations have rocked the online poker industry in the U.S., as Full Tilt has been shutdown, Absolute has lost nearly all its players, and PokerStars is still providing online poker services, but not in the huge U.S. market.

Since the DoJ seized the domains of the three indicted [geolink href=”https://www.pokernewsreport.com/online-poker-rooms”]poker sites[/geolink] in April, only PokerStars has paid back its players who had money in their accounts on the date of the seizure. Full Tilt is currently in the final stages of negotiations that would permit Group Bernard Tapie to acquire the fallen poker site. As such, the DoJ would reimburse U.S. players with unpaid account balances at Full Tilt, while Tapie would be responsible for the repayment of players throughout the rest of the world.

One month following Black Friday, prosecutors stated that an agreement with Absolute Poker had been reached to allow U.S. players to recover their funds. However, Absolute Poker remained practically mum until October when Blanca Games, the parent company of Absolute Poker and Ultimate Bet, its sister site on the CEREUS Network, reportedy proposed to liquidate its assets to facilitate repayment to its players. In an October press release from the regulating body of the CEREUS sites, the Kahnawake Gaming Commission stated at the time, “Over the past several weeks, we were advised of a potential solution prepared by Blanca and its representatives establishing a process to liquidate Blanca’s assets and distribute proceeds to players. We understand that this process has been presented to [the DoJ} for consideration and approval.” Apparently, Blanca is still waiting on the DoJ to approve its proposal. Perhaps the delay is caused by the DoJ having its hands full with the Full Tilt acquisition negotiations and the related player reimbursement procedures.

Beckley, a U.S. citizen who was living in Costa Rica, the site of Absolute poker’s base, returned stateside on Dec.19 to face up to the charges, according to a DoJ press release. Beckley was facing up to 30 years in the federal penitentiary on the original charges. His plea deal will allow him to do only a miniscule fraction of that time. He may actually be released before Absolute Poker and Ultimate Bet players see their bankrolls returned.

Of the other individual defendants charged in the case, Chad Elie and John Campos are fighting the DoJ allegations and have a trial date set for March 12, 2012. Ira Rubin, whom Beckley allegedly hired to process payments, according to the indictment, is believed to be negotiating a plea agreement also.