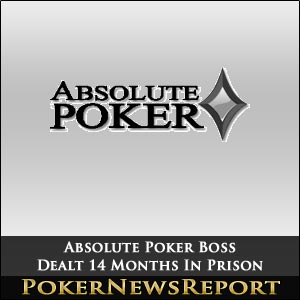 The 32-year old co-owner of one of three sites indicted in the Black Friday allegations, pled guilty in December and admitted his role in deceiving banks into believing that credit card transactions made by poker players wishing to fund their accounts at AP were for companies unrelated to gambling such as those selling sports merchandise. The 2006 Unlawful Internet Gambling Enforcement Act (UIGEA) was intended to prevent financial institutions from allowing the processing of transactions with offshore poker sites, but the [geolink href=”https://www.pokernewsreport.com/us-poker-sites”]US facing poker sites[/geolink] tried to circumvent the law by setting up phony companies.

U.S. District Judge Lewis Kaplan handed down the sentence by saying that Beckley deserved some time behind bars to make clear that the government of the United States means business in these types of cases, Reuters reported.

Beckley fully cooperated with prosecutors and the plea deal brokered between attorneys called for sentencing guidelines in the 12-18 month range, the forfeiture of $300,000, and a fine of up to $30,000. In May, Kaplan questioned the plea arrangement, initially believing that Beckley was getting off easy and that the punishment did not fit the crime. However, U.S. Department of Justice lawyers came to the defense of Beckley, detailing his cooperative efforts to the judge and the fact that no financial institutions lost money due to his fraudulent actions.

Judge Kaplan relented and doled out the lenient 14-month sentence after listening to prosecutors, as well as Beckley, when he told the judge I fooled myself into thinking that what I was doing was OK.

Beckley was one of 11 individuals named in the Black Friday indictments, along with PokerStars, Absolute Poker and Full Tilt. John Campos, a Utah banker who also processed payments for the poker rooms, received a three-month sentence from Kaplan earlier this year and is prohibited from ever working in the U.S. banking industry.

Chad Elie, an associate of Campos, pled guilty four months ago to violating the UIGEA, among other charges, and will be sentenced in October. Ryan Lang, Ira Rubin and Bradley Franzen have all copped to plea deals involving money laundering and UIGEA violations and still await sentencing.