The Black Friday fallout is still being felt as Absolute Poker and Ultimate Bet look to pay back pay players still awaiting access to their frozen accounts. 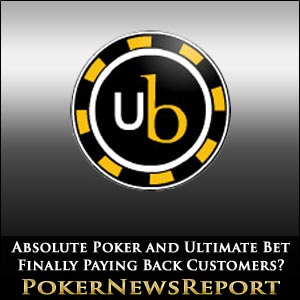 The fallout from Black Friday is still being felt across the globe as Absolute Poker and Ultimate Bet look to pay back pay players still awaiting access to their frozen accounts at the poker websites.

PocketFives co-founder Adam Small has managed to gain a scoop from insiders at Ultimate Bet and Absolute Poker, suggesting that customers of these poker rooms will at long last be supplied with money frozen following the US Department of Justice (DoJ) decision to close down numerous [geolink href=”https://www.pokernewsreport.com/online-poker-rooms”]poker websites[/geolink] back on April 15 this year.

There is a problem, however, as players are more than likely going to receive much less than they would have hoped from both poker websites.

Small stated that the repayments are almost certainly going to be around or “under 25 cents on the dollar” as Absolute Poker – whose co-founder Brent Beckley pleaded guilty in a Manhattan court to charges following the Black Friday injunctions – and Ultimate Bet start closing down.

Poker players will be disappointed

Small took to PocketFives recently to announce that, “from what I’ve been hearing around, it seems that people will be paid significantly less than the full amount of what they’re owed.

“It seems like they (Absolute Poker and Ultimate Bet) are legitimately closing shop and paying out what’s left.”

Countless thousands of customers will be left disappointed by this news, which Small gained from “multiple sources” inside the Cereus Poker network.

Meanwhile, The Financial Post has reported that rising female star Breeze ‘Breezie7’ Zuckerman – who was the leading woman at last year’s World Series of Poker (WSOP) main event when finishing in 121st place for $57,102 – has still not received her winnings from an event at poker room Carbon Poker in November.

The Californian contacted Carbon Poker about the lack of payment, with the poker website responding by informing her that there is “a delay on our withdrawal requests” and that they will not be able to pay out for at least eight weeks, even though the website’s Twitter account stated that six to eight “weeks is the official timeframe” put in place for withdrawals.

Unusually, for a major poker website, Carbon Poker takes a ‘processing fee’ when customers request a withdrawal, so making the delay even more annoying for players.

He added: “After problems players experienced trying to cash out on sites affected by the shutdowns, including the ongoing Full Tilt Poker saga, it’s alarming to hear another site can’t process timely withdrawals.

“Sites allowing American players have suffered increased scrutiny from authorities, and no one knows if or when another will be shut down – this creates a high-anxiety environment.

“We recommend players choose online poker rooms run by transparent establishments, like those run by public companies 888, Bwin.Party and Playtech.”

Taylor reckons poker rooms such as 888 Poker “would never risk their reputation and stock value by delaying withdrawals”, partly because they trade “on the London Stock Exchange” – so ensuring that their cash “is almost as safe as putting money in a bank”.

Unlike Carbon Poker, Taylor continued, 888 offers “no-fee withdrawal processes and timely payouts”, while the likes of Party Poker “is almost as highly ranked as 888 in terms of reliability of payments”.

Additionally, Taylor has been impressed by the likes of 888 and Party Poker, stating that “both these online poker sites place player satisfaction at the highest priority (so) ensuring quick payouts that over time result in a level of trust other sites just can’t compete with”.

So it looks like Absolute Poker and Ultimate Bet are on the way out, but will Carbon Poker and Cereus Poker survive during these tough financial times?

Keep coming back to Poker News Report for all the important updates on the aftermath of Black Friday.