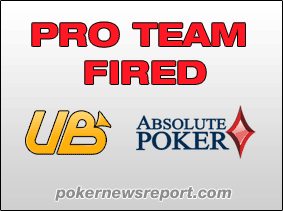 Blanca games, parent company to both online poker sites Absolute Poker and UltimateBet.com, has released a statement announcing a cut to their professional player roster. The announcement stipulated that their operations in the US have ceased due to the legal developments there. As such, many aspects of the company have had to be downsized. The measures have been taken in order to allow Blanca to focus on their non US market for the time being.

Blanca cites the severe impact of “Black Friday” as the primary cause. As such, many personnel and also staff have now been cut, including the roster of top pros known collectively as “Team UB” as well as one player who represented Absolute Poker. Blanca’s executive management team informed the players that their contracts had now been terminated. Eleven of the pros laid off are from the States, and include: Joe Sebok, Eric “Basebaldy” Baldwin, Prahlad Friedman, Brandon Cantu, Tiffany Michelle, Maria Ho, Dave “Hollywood” Stann, Adam “Roothlus” Levy, Scott Ian, Bryan Devonshire and Trishelle Cannatella. The pros join the list of employees from the Blanca games workforce, who the company let go last week due to increasing financial strain.

The statement went on to say that it was a disappointment and a highly difficult task for the Blanca management to sever ties with the sponsored pros. Each had been hand picked for their extraordinary talented over the felt, as well as being “brand appropriate.” Although Blanca emphasised that they appreciated the significant amount if time and dedication which the professional player team has given to the brand, many have now lost their most reliable income source. However, given the circumstances, it was probably to be expected.

According to a separate press release issued by Blanca, the issue of player funds is still not resolved. They are currently in talks with the US Attorney’s office, and hope to reach an agreement soon. Meanwhile, after severe cut backs, Absolute Poker and UltimateBet now plan to focus on the consumer markets outside of the US.