Absolute Poker and UB Players Hear Nothing but Silence

If you are AP/UB player with money on there and are feeling lost and forgotten with all poker news focusing on Full Tilt as of late, you are not alone. 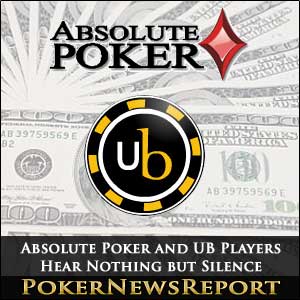 If you happen to be an AP/UB player with money on either site and are beginning to feel lost and forgotten with all the poker news focusing on Full Tilt Poker as of late, you are not alone. There are many of you out there.

Players at PokerStars have been paid. Full Tilt is in negotiations to be sold to Group Bernard Tapie with a major focus of the sale being that players are paid back the money owed to them. Absolute Poker and Ultimate Bet players have heard virtually nothing since Black Friday on whether or not they can expect to see their account balances returned.

Let’s examine the pros and cons of the situation and try to determine the odds of receiving your forgotten bankroll from AP/UB. Keep in mind that these theories are pure speculation.

First of all, the Department of Justice (DoJ) released a statement a couple of weeks ago that stated they entered into a domain-name use agreement with Full Tilt in April that authorized the poker site to return funds to players. Full Tilt could not return the money because, allegedly, most of it went into the pockets of the board of directors and the rest of it was mismanaged. How does this pertain to AP/UB? Well, we would have to assume that the DoJ made the same agreement with AP/UB. We know they made that agreement with PokerStars because those players have been paid. AP/UB is part of the same case that was filed on Black Friday, United States v. PokerStars, et al., 11 Civ 2564 (LBS). One would like to think that AP/UB also has been given the go-ahead to return funds to players, but hasn’t done so pending the outcome of the litigation.

Secondly, AP/UB is still up and running. When scanning tables at the [geolink href=”https://www.pokernewsreport.com/online-poker-rooms”]poker websites[/geolink], it resembles a ghost town. What once were full tables are now deserted. It is estimated that 99% of the traffic is gone. The site has not thrived like PokerStars, nor has it sunk to the depths of Full Tilt. Perhaps somewhere in the middle.

Third, AP/UB is accepting cashout requests from non-U.S. players. However, accepting the request and actually paying out the amount requested are two different issues. One non-U.S. AP player has received one payout since Black Friday. The player’s next cashout request, submitted at the end of May, is apparently in AP cyberspace. When inquiring about the cashout request and sort of begging for the money, here is the response:

Thank you for contacting us.

Payout processing and their timelines have been adversely affected as a result of recent developments in the United States and changes to withdrawal policy.

We are working to return withdrawals to normal service levels as quickly as possible.

Your patience is appreciated and we will provide you with more information as we work to resolve these issues.

Its hard to say with any certainty if AP/UB players will see their money. There is a lot of maneuvering behind the scenes that your average player is not aware of. How many millions of dollars were seized by the government? When will the dollars be returned? However, it is encouraging that the DoJ is concerned about the repayment of funds to Full Tilt players. Again, one would assume or at least hope that the DoJ would also be comcerned for the AP/UB victims.

What the DoJ should do at this point is take control of payments to players. Look at the books, take the seized money and pay back the players themselves. Who could argue with that scenario?