There appears to be good news, at long last, for poker players unable to access their money with Absolute Poker and UltimateBet. 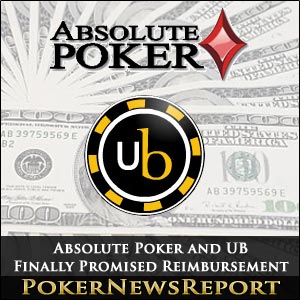 There appears to be good news, at long last, for poker players unable to access their money with Absolute Poker and UltimateBet.

The Cereus Poker Network has revealed that the platform has made plans to return all funds that were seized by the US Department of Justice (DoJ) following the shattering events of Black Friday.

As you will all know, the DoJ closed down numerous [geolink href=”https://www.pokernewsreport.com/online-poker-rooms”]poker websites[/geolink] in the USA on April 15, alleging that Absolute Poker, UltimateBet, PokerStars and Full Tilt Poker broke the Unlawful Internet Gambling Enforcement Act (UIGEA) by engaging in money laundering and bank fraud when processing money transfers to and from their customers’ accounts.

So, more than six months down the line, it seems the Absolute Poker and UltimateBet customers unable to withdraw money from frozen accounts will finally receive what is due to them.

The Canada-based Kahnawake Gaming Commission (KGC) released a statement detailing that they had held numerous conversations “over the past several weeks” with Blanca Gaming – the business which bought out Cereus back in August of last year – over the best route to take in refunding players.

The KGC statement added that they have been “advised of a potential solution” presented by Blanca Gaming that will establish a series of actions “to liquidate Blanca’s assets” and deliver “proceeds to players”.

The Gaming Commission release continued by pointing out that they believe the proposed process “has been presented” to the United States District Court for the Southern District of New York (SDNY) for their “consideration and approval”.

Finally, the KGC added that their “foremost concern” during the long months without any positive developments has been to return US and non-US players’ funds “as quickly and completely as possible”.

Obviously, this is good news for frustrated customers at Absolute Poker and UltimateBet – many of whom have quit for other poker websites – but they have been let down many times over the months since Black Friday, so the celebrations really shouldn’t begin until the cash is back in their bank accounts.

Remember, there was talk of an agreement with the DoJ back in May that would result in the refunding of balances. That, of course, came to nothing – and now, five months later, Cereus are again supposedly close to paying their dues.

Let’s all keep our fingers crossed that an unacceptably long wait for those players affected by Black Friday will now receive what is rightly theirs.