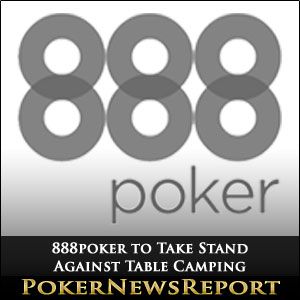 A representative of 888poker announced yesterday on the Two Plus Two forums that the site will be activity seek[ing] out table campers who abuse the sit out feature. Table campers will be subjected to restrictions, temporary bans and potentially lifetime suspensions.

This is not the first time 888poker has taken a stand against players who exploit online poker software. In fact, many sites have taken stands against table camping and bumhunting, with mixed results.

While the 888poker rep did not express exactly how the site is going to determine what constitutes table camping, he did indicate that 888 will address [table campers] on site.

For those who do not know, a table camper is someone who sits at a table, elects to sit out and only plays a hand if he or she is awarded the button. As soon as the camper is asked to pay the big blind, the camper leaves the table. Using this exploit the camper gains a significant edge.

Here’s how table camping works in practice: A camper will sit at a six-max table, wait for two players to begin playing and then Sit In. If the player is awarded the button, the camper will play a hand, otherwise he leaves. Rinse and repeat.

Not only is camping unethical, it discourages recreational players from sitting at a higher stakes game. For instance, a $25/$50 PLO lobby may feature 15 games. If 10 of them are camped out and the other five are empty, the recreational player is going to look for a game elsewhere. Regulars, on the other hand, will be forced to camp tables themselves, as it will be the only way for them to find a game at their preferred stakes.

I have been asked to pass on all the feedback relating to this but I will check with them about you can report them, maybe [they’re] going to monitor these tables themselves and sort it out from there.

Overall, reaction to the 888poker rep’s post was decidedly mixed, with some players asking further questions, some complaining that the measures have yet to take effect, and a few claiming that the site is catering to the regs. Whether 888poker’s measures are severe enough to discourage table camping is yet to be seen.