888poker to Sponsor Women in Poker Hall of Fame Ceremony

As a firm believer in encouraging more women to play the game of poker, 888poker has announced that it will be sponsoring this year’s ceremony that will induct two more members of the fairer sex into the Women in Poker Hall of Fame (WiPHoF) set for June 26 in Las Vegas. 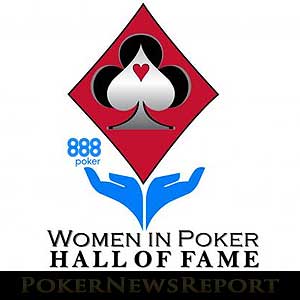 As a firm believer in encouraging more women to play the game of poker, 888poker has announced that it will be sponsoring this year’s ceremony that will induct two more members of the fairer sex into the Women in Poker Hall of Fame (WiPHoF) set for June 26 in Las Vegas.

Although women are certainly eligible for the all-embracing Poker Hall of Fame that was established in 1979 – there are three ladies who have been enshrined among its current membership of 54 – the WiPHoF was created in 2008 as a means to honor women who have made significant contributions to the world of poker. There are currently 19 members in the WiPHoF.

This year’s class of candidates for WiPHoF induction were initially nominated by an at large public of poker players and fans. After an extensive review process of the names submitted, the nominees were winnowed down to 11 deserving ladies by the WiPHoF Organization Committee and current WiPHoF members.

This list of women are heavy hitters in the industry and deserve a nod for their hard work and accomplishments in poker, read a WiPHoF press release.

Much like the Poker Hall of Fame, candidates for WiPHoF honors must meet certain criteria of eligibility. The requirements for candidacy are as follows:

Eligible candidates who make the short list are contacted to confirm their desire to be nominated. WiPHoF members and certain poker media representatives then cast their votes as to who they feel are most deserving of WiPHoF selection among the class of nominees.

The 11 extraordinary women in poker nominees for 2018

Jennifer Tilly – A WSOP Ladies Event gold bracelet champion in 2005 and winner of almost $1 million on the tournament circuit, Tilly’s renown as a successful Hollywood actress has certainly advanced the ideal of attracting females to poker.

Lupe Soto – Two decades of devotion to poker that included founding the WiPHoF itself, Soto also created other poker entities such as the Ladies International Poker Series (LIPS Tour) and the charitable foundation Poker Gives.

Kara Scott – More than $600K in live cashes and her role as 888poker ambassador are but a fraction of Scott’s influence and standing in poker that includes TV broadcasting and commentator gigs.

Shirley Rosario – A force on the felt in tournaments as well as cash games, Rosario has also been active in consulting work and running poker-related websites.

Karina Jett – A poker career spanning two decades that includes almost $500K in winnings in addition to an abundance of charitable endeavors has Jett poised to be inducted at some point in time – if not in 2018.

Maria Ho – Perhaps the most recognizable face in poker among the ladies since the two Vanessas – Selbst and Rousso – have gone on to pursue other interests, Ho is among the top female tourney winners of all time and has lended her expertise on a number of TV-related poker projects.

Haley Hintze – Known for her investigative journalism that was instrumental in uncovering online poker cheating scandals, Hintze made the short list as a token of appreciation for her years of poker media service.

Four women are on 888poker’s pro roster, including one of this year’s nominees, Kara Scott. While the number of women in poker still hovers around 5%, Scott rightfully said that the ladies who do participate make up a very small but vital part of the poker industry.