Players qualifying for the WSOP Main Event via an SME satellite will have the prize money increased to $10 million if they subsequently win the Main Event. 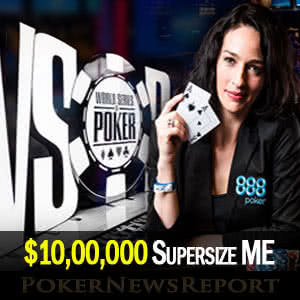 Players qualifying for the WSOP Main Event via an SME satellite will have the prize money increased to $10 million if they subsequently win the Main Event.

888Poker´s “Supersize ME” promotion was a massive success last year. Of the 148 players who qualified for the World Series of Poker Main Event via 888Poker online satellites, 60 qualified via Supersize ME (SME) satellites – making them eligible for a massive $5 million bonus if they subsequently won the Main Event.

Unfortunately, the closest any Supersized qualifier got to claiming the enhanced prize was 68th place, although 888Poker did have two representatives on the ME Final Table that had qualified through non-SME online satellites – Fernando Pons and Griffin Benger finishing in ninth and seventh places respectively.

How the WSOP Supersize ME Promotion Works

Over the next three months, 888Poker will be running a host of satellites and sub-satellites giving players the opportunity to win packages to the World Series of Poker this summer. Players who win a Main Event package via special Supersize ME satellites – and then subsequently win the WSOP Main Event – will have their first place prize money increased to $10 million.

Although unlikely to represent the same value as [geolink href=”https://www.pokernewsreport.com/888poker-offering-5-million-supersize-me-wsop-bonus-20772″]last year´s Supersize ME promotion[/geolink], the enhanced first prize is likely to be worth around $2 million to the winner. 2016 WSOP Main Event Champion – Qui Nguyen – collected $8,005,310 for his victory, while Joe McKeehan took home $7,683,346 for topping the Main Event field the previous year.

Although it will be a tough ask to top a field of 6,000+ in order to win the extra Supersize ME cash offered by 888Poker, it is well worth aiming to win a Main Event package. The packages not only consist of the $10,000 buy-in into the WSOP Main Event, but also include five nights´ accommodation at the Vdara Hotel, a contribution towards travel expenses and plenty of 888Poker themed goodies.

Direct buy-ins for the WSOP Supersize ME satellites cost $1,060, but there are a host of ways players can qualify for the satellite starting at just $0.01. Last year´s ninth placed player – Fernando Pons – collected $1,000,000 for an investment of only $30.00. Imagine how it would feel to walk away from Las Vegas this summer with $10 million in your pocket (*) after investing just $0.01.

If there was a prize for who could drown a decent promotion in terms and conditions, 888Poker would walk away with it every time. The site dedicates ten times as many words to the terms and conditions as it does to explaining this offer, but fortunately has left out the most contentious terms from last year´s promotion barring players in the GPI 100 or who had ever finished in the top 50 of a WSOP Main Event.

Just Before You Pack Your Bags for Vegas … …

A quick reminder that 888Poker is hosting its [geolink href=”https://www.pokernewsreport.com/888poker-reveals-schedule-for-may-xl-inferno-series-21599″]XL Inferno Series[/geolink] between May 7th and May21st. During the fifteen days of action, 197 events will be crammed into the series which has combined guaranteed prize pools of $7.5 million. Although the series is going head-to-head-to-head with PokerStars SCOOP and Party Poker´s PowerFest, the series is sure to be a popular choice for many players.

Players who win any of the XL Inferno events will be invited to compete in a Champion of Champions tournament on May 23rd. Among the forty Champions´ prizes will be another package to the WSOP Main Event – which, although not qualifying for the Supersize ME bonus, is another good reason to direct some of your poker action over the next couple of months at [geolink href=”https://www.pokernewsreport.com/888-poker”]888Poker[/geolink].