888Poker has released a “Steps” qualifying route to their weekly WSOP Finals, which could see players qualify for the WSOP Main Event for as little as $0.01. 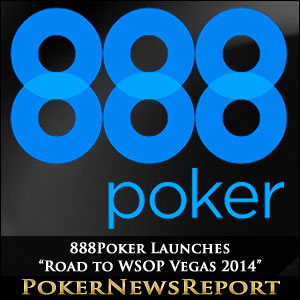 888Poker has released a “Steps” qualifying route to their weekly WSOP Finals, which could see players qualify for the WSOP Main Event for as little as $0.01.

Each week from now until the 8th June, [geolink href=”https://www.pokernewsreport.com/888-poker”]888Poker[/geolink] is hosting weekly WSOP Vegas Finals in which the winner can win an all-expenses trip to Las Vegas, with entry included into the $10 million guaranteed WSOP Main Event.

Unlike most “Steps” qualifiers -which are a series of Sit n Go games that have to be completed before they can start – 888Poker´s “Road to WSOP Vegas 2014” comprises of regularly scheduled multitable tournaments which will pay out tournament tickets to the next level depending on the number of players that register.

Each of the six steps can also be bought into directly so that players can join the “Road to WSOP Vegas 2014” at a higher level, and there is no limit to the number of times that a player can start his journey – although it should be pointed out that tickets to the next level expire two weeks after they have been won. The map for the “Road to WSOP Vegas 2014” is as follows:

What the 888Poker Package Consists Of

If you win the WSOP Vegas Main Event 2014 Qualifier (and there may be more than one winner in each final depending on the number of entries), you will be accommodated in the Palazzo Hotel in Las Vegas for six nights from the 3rd July. This will be extended at 888Poker´s expense if you are running deep in the Main Event.

You will also receive $10,000 for your tournament buy-in, $1,500 travelling expenses and $500 spending money. In addition, 888Poker are hosting an exclusive Welcome Party and 4th July Event to which you will be invited and you will also receive an 888Live poker kit – consisting of t-shirt, hoodie, headphones, baseball cap, card protector and a lanyard (the cord you pin your phone to).

Exclusive Offer for Readers of PokerNewsReport

Unfortunately this offer (and the “Road to WSOP Vegas 2014” promotion) is not available to players in the States.