888Poker has revealed the schedule for its XL Inferno Series and a Champion of Champions promotion in which players can win packages to this year´s WSOP. 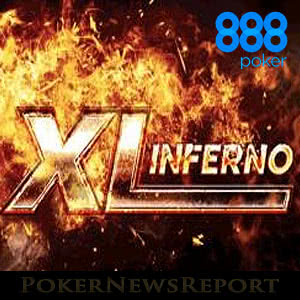 888Poker has revealed the schedule for its XL Inferno Series and a Champion of Champions promotion in which players can win packages to this year´s WSOP.

888Poker has announced its May XL Inferno Series will be the first of three major tournament series planned over the next nine months. The first leg of the trio will take place between Sunday May 7th and Sunday May 21st – meaning it will be going head-to-head-to-head with [geolink href=”https://www.pokernewsreport.com/preliminary-schedule-released-for-pokerstars-scoop-2017-21589″]PokerStars´ SCOOP[/geolink] and [geolink href=”https://www.pokernewsreport.com/party-poker-announces-dates-for-may-powerfest-series-21584″]Party Poker´s PowerFest[/geolink].

The XL Inferno Series will comprise of 197 events and guarantee a minimum of $7.5 million in prize money. The feature event of the series is the $1,050 buy-in Main Event (guaranteed for $1.5 million) and there are plenty of events with smaller buy-ins for players with more modest bankrolls. 888Poker is also hosting a comprehensive satellite schedule for the majority of events in the series.

Up until Friday 5th May, 888Poker will be hosting two special XL Inferno satellites each day. At 6:05pm (all times GMT), an XL Inferno Main Event qualifier will give away three seats to the $1.5 million guaranteed Main Event; and at 10:35pm, a Mini Opening Event qualifier will give away thirty seats to the $50,000 guaranteed event on the first day of the series.

Players who have made a real money deposit into their 888Poker accounts can claim two free satellite tickets simply by logging into their accounts and clicking on the pop-up link to redeem their tickets. Further tickets can be won by completing “Personal Poker Challenges” – details of which will be sent to each individual player after they have competed in their first XL Inferno qualifier.

Players who have not yet made a deposit will receive three free satellite tickets when making a deposit of $10 or more into their accounts using the 888Poker bonus code “INFERNO10”. Once players has used one of their three free XL Inferno satellite tickets, they will also be eligible to complete the “Personal Poker Challenges” in order to win further satellite seats.

Win a Package to the WSOP Main Event

More than $3,000 of tournament entry tickets will be handed out to players filling fourth to fortieth places in the Champion of Champions tournament, and although the majority of the prizes are for future XL series (planned for September 2017 and January 2018) at least it will save you the process of having to complete daily challenges and then playing a qualifier in order to enter a future event.

Players competing in the special “Chip-In” events during the series will also be helping support a fantastic charitable gesture by 888Poker. The site has said it will contribute the fees paid to enter the “Chip-In” events to “Raising for Effective Giving” to help the charity with its battle against global poverty. The donation of the fees will not affect the guarantees for these tournaments.

Going to be an Action Packed Fifteen Days

With 197 events and plenty of satellites running between 7th and 21st May, it is going to be an action packed fifteen days. Make sure you don´t miss out on some of the $7.5 million on offer, the opportunities to qualify for the Main Event for free, and the chance to win a package to the WSOP in the summer by visiting [geolink href=”https://www.pokernewsreport.com/888-poker”]888Poker[/geolink] today.