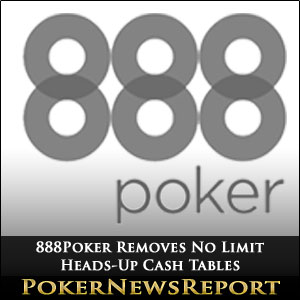 The removal of the tables came to light when a thread was started on the 2+2 forum by “MadeInPolanD” who had received an email from 888Poker support replying to his question about why there were no “open” head-up cash game tables – I.e. tables at which no player was seated.

The reply came back that 888poker has made the business decisions to remove the Heads Up cash games. At 888poker we strive to maintain a competitive and fun poker atmosphere for our players and as such we continuously review the variety of games we offer, and take the necessary steps to ensure that our players’ experience stays enriched.

The announcement was confirmed by the 888Poker rep on the 2+2 forum, who said it was in keeping with the company´s strategy to “make out poker room competitive and fun” although he was quick to point out that Heads Up Sit N Go tables will remain available for your playing pleasure.

A major discussion subsequently erupted on the 2+2 forum thread about whether the decision was a smart move or one influenced by profit. Some contributors sided with the OPs views that the site was genuinely concerned about “HU Whales” losing regularly to “Bum-hunting Regs”, while others felt that the closure of the Heads-Up cash tables would force players who preferred short-handed games of poker to play at 6-Max tables, at which 888Poker have a higher rake cap.

Indeed, “Bum-hunting” has become a major problem for online poker sites in recent months, and 888Poker is not the first site to remove No Limit Heads Up cash tables from its poker client – the Microgaming Poker Network (MPN) took their heads-up tables out of their portfolio in June and replaced them with the eight-player fast-fold “Blaze” game.

Party Poker and the iPoker network have both implemented limits on the number of cash tables No Limit Heads Up players can simultaneously be seated at and, back in May, PokerStars introduced a “King of the Hill” policy  – in which players who were sitting out at a table which was not dealing were removed after 30 seconds – to prevent weaker players being preyed upon by more experienced ones.

How Significant is the Timing?

The removal of the No Limit Heads Up cash games comes a week after 888Poker introduced its beta Mac client, but perhaps more significantly while the company is preparing to launch its sites for real money poker in Nevada and New Jersey.

It is well chronicled that there have been significant delays in the launch of 888Poker´s WSOP.com real money poker site in Nevada while gaming regulators wait to be convinced about the fairness of the games, and maybe the real reason for the removal of the No Limit Heads Up cash games was to resolve the issues they are currently having with the powers that be in the States.

Of course, it could just be a case that 888Poker are trying to protect their less-experienced players, or that the conspiratorial NVG´s on the 2+2 forum are correct and this is a move to increase 888Poker´s profits. Maybe, we will never know!