888Poker has launched an exciting promotion for New Jersey poker players in which they can receive 80% rakeback on all rake paid in cash games until April 30. 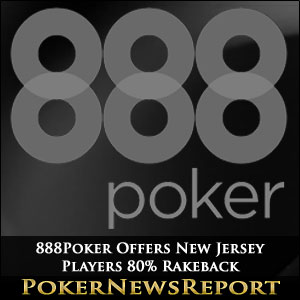 888Poker has launched an exciting promotion for New Jersey poker players in which they can receive 80% rakeback on all rake paid in cash games until April 30.

Online poker players in New Jersey are being offered one of the most lucrative rakeback deals ever according to the terms of 888Poker´s latest promotion. Players are being asked to stake $500.00 in a single day between now and 31st January, and in return they will be eligible for 80% rakeback on all the rake paid at the 888Poker cash game tables between the day they qualify for the offer and Wednesday 30 April.

Once a player has qualified for the promotion (i.e. staked $500.00 in a single day), they will then receive a “Claim Email” from 888Poker´s customer support each Sunday, advising them of how much rakeback they are entitled to and containing a link which the player must click on to have the rakeback immediately credited to their account. The email – and the rakeback – automatically expires after 7 days, so it is important that emails from 888Poker are not ignored!

How to Participate in the 888Poker Rakeback Promotion

According to the 888Poker website, there is no need for players to “opt-in” or email customer support to say that they want to be involved in the rakeback promotion. A promotional email sent to existing online poker players in New Jersey also suggests that there is no other requirement other than staking $500.00 in a single day.

It doesn’t get much bigger than this – 80% Rakeback on all cash games through May!

But be sure to check your emails – every Sunday we’ll email you a link to claim your weekly rakeback amount.

With offers such as the 80% rakeback, 888Poker are starting to make ground on the two leaders in the New Jersey online poker market – WSOP.com and Party Poker. In addition to the rakeback promotion, 888Poker are offering a 100% match bonus on first deposits up to $500.00 and $10.00 free poker money just for registering an account. They have also attracted a lot of attention due to their 24/7 freeroll tournaments, which run each hour and have $50,000 up for grabs every week.

While the volume of traffic is flat-lining on WSOP.com and Party Poker, more players are signing up with 888Poker because of its superior promotions, customer support and online poker platform (even though WSOP.com uses the same poker software). It is conceivable that 888Poker could soon become the leading online poker site in New Jersey – especially between now and the end of April when players will be receiving 80% rakeback from 888Poker!