888Poker has launched a promotion that could reward an online qualifier with a $5 million bonus – if they then win the World Series of Poker Main Event. 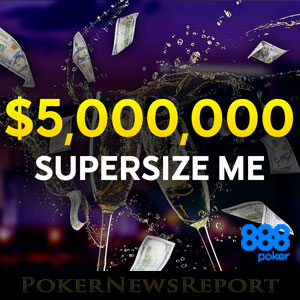 888Poker has launched a promotion that could reward an online qualifier with a $5 million bonus – if they then win the World Series of Poker Main Event.

Over the past few months, 888Poker has been running [geolink href=”https://www.pokernewsreport.com/win-a-vegas-trip-with-888pokers-wsop-league-tournaments-20674″]promotion[/geolink] after [geolink href=”https://www.pokernewsreport.com/spin-your-way-to-vegas-with-888poker-20764″]promotion[/geolink] in order to qualify as many players as possible for the 2016 World Series of Poker. As a result, hundreds of 888-patched players will be heading to Las Vegas throughout June and July to compete in the biggest live poker event in the world.

Many will have dreams of returning to their homes with a substantial winner´s cheque – but none more so than qualifiers from 888Poker´s “Supersize ME” tournaments, who will win a $5 million bonus if they win their Main Event package in one of 888Poker exclusive qualifiers and then go on to win the WSOP Main Event.

In order to be eligible for the bonus, players must compete in one of the $600 buy-in “Supersize ME” tournaments on Sunday 5th June and Sunday 12th June at 7:05pm (GMT) and win a WSOP Main Event package. The package itself is worth $13,500 and includes:

If one of the package winners from the “Supersize ME” tournaments goes on to win the WSOP Main Event, he or she will receive the $5 million prize is on top of their winnings – $3 million paid forty-five days after the WSOP Main Event has concluded, $1 million in March 2017 and $1 million in March 2018. The winning player will also be invited to serve as an 888Poker ambassador for three years – not a bad gig if you can get it!

Amateur Players Only Qualify for the Big Prize

Although the odds are against a qualifier from one of the “Supersize ME” tournaments going onto win the WSOP Main Event, 888 Poker has added some fairly comprehensive terms and conditions to the promotion. The site has probably had to take out an insurance policy against the prize being won, so some of the terms are likely stipulated by their insurance company.

Consequently, although every player can still win the $13,500 WSOP Main Event package, any player who has ever finished among the top fifty players in a previous WSOP Main Event will not be eligible for the “Supersize ME” $5 million bonus. Also excluded from the bonus is any player who has ranked within the top one hundred players of the Global Poker Index (GPI) in the past five years.

Will You Supersize to Beat Jamie Gold´s Record?

Currently, the biggest ever WSOP Main Event first prize is $12 million – won by Jamie Gold in 2006. 888Poker has been keen to point out that, had the $5 million bonus been added to the $7,683,346 Joe McKeehen won [geolink href=”https://www.pokernewsreport.com/mckeehen-runs-super-hot-to-take-wsop-main-event-20325″]for taking down the WSOP Main Event last year[/geolink], McKeehen´s prize would have set a new record.  Speaking about the “Supersize ME” promotion, Gold said:

Winning the WSOP Main Event is a life-changing experience for anyone and the prize money is huge. This offer from 888 could help the next winner surpass my $12,000,000 prize. I think it’s wonderful and would be about time someone won more in the Main Event. I’ve been excited for that to happen and if the archaic laws banning online poker in the U.S. ever change I’m confident the WSOP Main Event prize will exceed $25,000,000.

Unfortunately, the terms and conditions of the promotion prevent Jamie Gold from qualifying for the $5 million bonus (he has finished in the top fifty players in a WSOP Main Event after all). However, most readers of PokerNewsReport.com are outside of the GPI top one hundred players and will be eligible for the Supersize ME promotion. We expect a very tense games over the next two Sundays at [geolink href=”https://www.pokernewsreport.com/888-poker”]888Poker[/geolink]. We´ll be there trying to win a package to the WSOP Main Event. We hope to see you too.