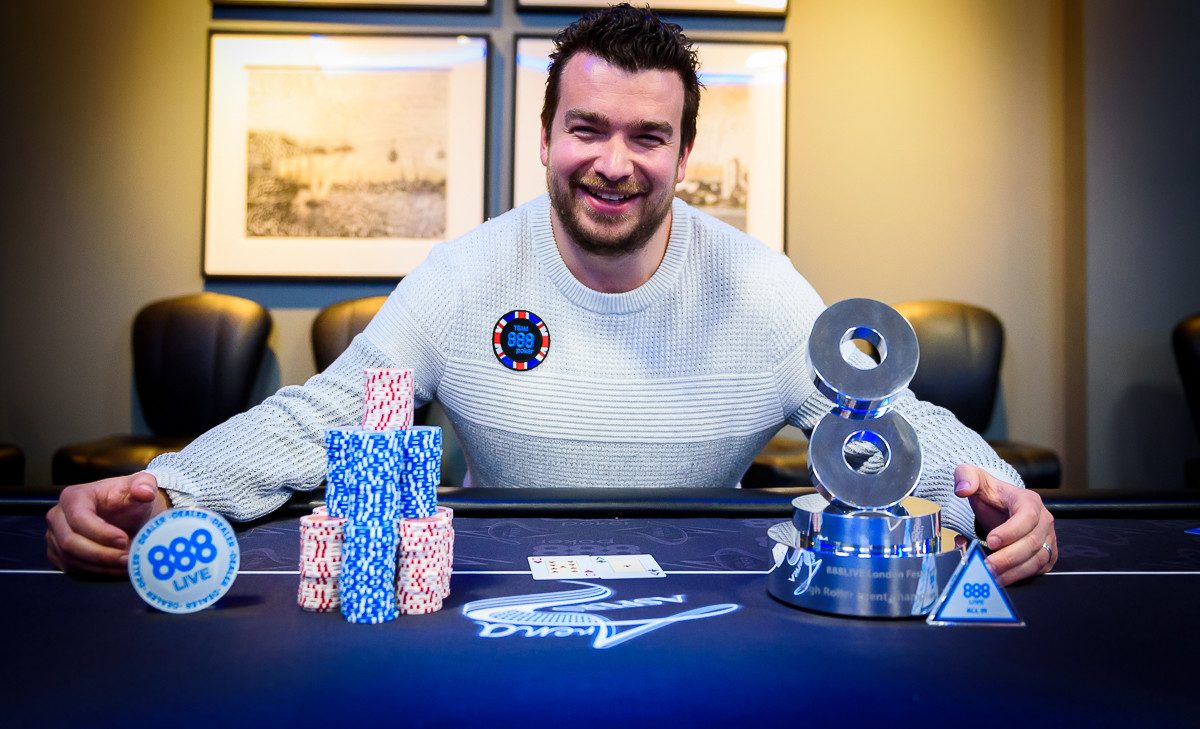 The ambassador of 888poker, Chris Moorman, won the 888poker LIVE London High Roller this week, which required a buy-in of £2,200. The LIVE London tournament took place at the Aspers Casino, located in Westfield Stratford London.

There were three survivors of Day 1 who were ambassadors for 888poker, Martin Jacobson, Moorman, and Ana Marquez. However, Moorman was the only one to make it to the cash list.

Moreover, he managed to win the event along the way! Some of the big names who did not make it to the money list included Nick Marchington, Christopher Yong, and Ivan Deyra.

The top six players were in the money, and the bubble boy turned out to be Jose Planells, who ended up in seventh place with empty pockets. The field itself wasn’t that big, as a total of 39 entries were recorded, creating a prize pool of £77,220.

The six players who were at the final table got an opportunity to share the pool among themselves. Moorman, therefore, achieved yet another victory and won a total of £27,000, which is the biggest portion of the prize pool.

He accumulated $6 million in lifetime earnings from playing poker, as stated on his profile in the Hendon Mob database. However, Moorman is also very active as an online poker player, and he has received numerous rewards for his achievements in this type of entertainment.

In other words, Moorman (whose online poker nickname is Moorman1) has managed to earn much more than the $6 million in the world of online poker.

The top six players made it to the money list and to the final table. The first one to hit the rail was Raul Martinez from Spain, who earned a total of £5,220 for his effort. The next to follow Martinez was UK player Damian Bell, who had to settle for £7,000 and fifth place.

Fourth place was reserved for Antoine Saout from France, who managed to win a total of £9,000. The last player to hit the rail before heads-up play was an Australian, Nicholas Lee, who earned £12,000 for his effort.

The two remaining players were Benjamin Winsor and Moorman — both of them natives to the United Kingdom. At the start of heads-up, Winsor was leading 2-1 in chips. However, Moorman did not take long to double up and take the lead.

In fact, Moorman was playing really well, making Winsor go down to only seven big blinds at one point. At that point, Winsor decided to jam a suited ace-trey, only to stumble upon ace-nine that Moorman had in his hand.

By winning this event, Moorman achieved another great victory. However, this was just one of the events that are taking place in London as a part of the 888poker LIVE Festival London.

Right now, there’s another, more important event taking place there — the Main Event, which required the buy-in of £1,100. Day 1 saw a total of 58 entries and 13 re-entries in total, as 11 levels have passed, lasting 40 minutes each.

The event also takes place at the Aspers Casino in Westfield Stratford, London. At this writing, Kfir Ivgi, a player from the United Kingdom, is the chip leader with almost twice as many chips as Iaron Lightbourne, the current second-place player. The Main Event will end soon, so make sure to check the results once it wraps up.