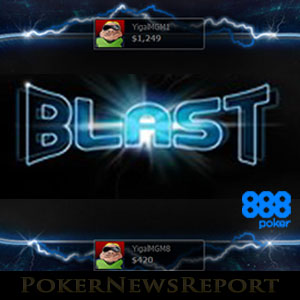 888Poker may be the last of the major online poker sites to launch a lottery-style, super-turbo Sit & Go game, but its new “BLAST” game is a vast improvement compared to some similar products already available for poker players.

Launched this week on the Windows download version of the 888Poker software, BLAST takes super-turbo Sit & Go games to a new level – with more chances to win a bigger prize, a better distribution of the prize money, and a time limit assigned to each game.

The first thing players will notice about BLAST is that it is a four-handed Sit & Go game rather than a three-handed game. When four players have registered, a random prize is spun of between 2x and 10,000 the buy-in and the game gets underway.

Players start with 1,500 chips and blinds of 25/50 with a 5 chip ante. The blinds increase every two minutes until a time limit for the game is reached. At this point the game changes into an All-In Shootout, in which every player is all-in every hand until a winner is determined.

The time limit for each game depends on the value of the prize pool multiplier:

A countdown clock appears in the top left-hand side of the BLAST screen to advise players how long is left in each game. The idea of the countdown clock is to add a touch more excitement to the game. In theory the countdown clock should encourage players to take a few more risks in order to increase their chip stacks and give them an advantage if/when the game goes into All-In Shootout mode.

888Poker appears be giving every player the opportunity to enjoy its new super-turbo game by starting the buy-ins at just $0.10. Buy-ins are also available at $1.00 and $5.00, with the top level of buy-in for BLAST games being $30.00.

Naturally, with four players, the games are harder to win. 888Poker has considered that by distributing the prize money for the higher prize levels between second, third and fourth places – depending on the value of the multiplier:

Early Feedback on the BLAST Games

There has been a mixed reaction to the introduction of 888Poker´s BLAST Sit & Go games. Players who gauge the virtues of a poker game by slide rule measurements have said that BLAST represents poor value and the All-In Shootout removes the element of skill in the endgame.

However, more pragmatic observers suggest that players who are concerned they are unable to win a six minute game of poker have plenty of other [geolink href=”https://www.pokernewsreport.com/888-poker”]opportunities at 888Poker[/geolink] to choose from. Those in favour of the game believe that BLAST adds a new dimension to an already substantial portfolio of games at 888Poker and levels the playing field for new and recreational players.