888Poker is celebrating the season of giving by hosting an $800,000 “Gift Shower” promotion in which players can win superb gifts and cash prizes. 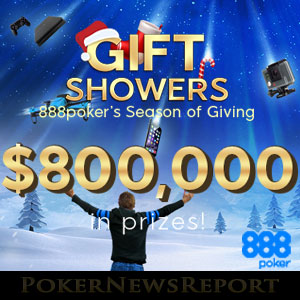 888Poker is celebrating the season of giving by hosting an $800,000 “Gift Shower” promotion in which players can win superb gifts and cash prizes.

The run up to Christmas could be particularly lucrative at 888Poker. Between now and December 25th, the site is hosting a Gift Shower promotion in which players can win iPhones, Cameras, PlayStations and Drones, and share in more than $250,000 in cash prizes.

The promotion has three elements to it – a daily all-in gift tournament, three-time daily “Lucky Star” cash tournaments, and a weekly “Starburst” tournament with $5,000 in cash prizes plus a Bebop drone awarded to the winner of each week´s event.

Participation in the Gift Shower promotion is free, although players who have made a deposit into their 888Poker accounts will have more opportunities to win a prize thanks to the Star Spin game – more information about which is provided below.

How the Gift Shower Promotion Works

Once players have used their two tournament tickets, additional tickets can be won by completing daily challenges or by winning seats in the Star Spin game – details of which are below. The daily challenges that players will be asked to complete consist of:

The Star Spin game is a pop-up game that launches on the first occasion a player logs into their 888Poker account each day. Simply click on the pop-up game for a free spin of the wheel, which will stop at one of the following prizes:

Each Sunday at 8:35pm, 888Poker will be hosting a $6,500 “Starburst” tournament offering $5,000 in cash prizes plus a Bebop drone to the winner of the tournament. In order to get a ticket for the tournament, players either have to win it via the Star Spin game or complete a weekly challenge that will be set for them each Saturday morning (players will be informed of their challenge by email).

The weekly challenges will be set according to each player´s previous history on 888 – and may not be exclusively centred around poker. Therefore, players may be required to wager a certain amount at the 888 casino, or place bets at 888 Sports. Once the weekly challenge has been completed, tickets will be credited to each player´s account and can be found in the “My Profile” section of the poker lobby.

Don´t Miss Out on the Gift Shower Promotion at 888Poker

The Gift Shower promotion started yesterday, so already dozens of gifts and $6,000 in cash has been given away by 888Poker. To be sure of maximising your opportunities to collect a prize in the event, log into your account every day and complete the daily missions and play the Star Spin game. As mentioned above, the Star Spin game is only available to players who have made a real money deposit into their accounts.

If you have not yet started playing at 888Poker, this is a great time to get involved. The Gift Shower promotion is typical of the exciting and imaginative promotions hosted regularly by 888Poker and, if you make your first deposit after visiting the site from our links, you will be entitled to up to $88 in free poker money (varies according to location) plus an exclusive first deposit [geolink href=”https://www.pokernewsreport.com/888-poker”]888Poker bonus[/geolink] of up to $600.00. Don´t miss out on the Gift Shower promotion. [isGeoAllowed room=”888poker”]Visit 888Poker today.[/isGeoAllowed]