888Poker have very quietly launched a downloadable poker client for Mac – and if you are fast enough, you could pick up a $20.00 bonus for helping test it out. 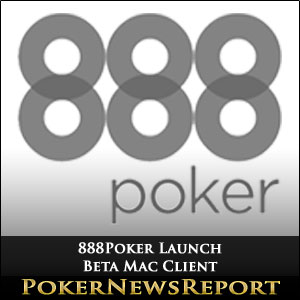 888Poker have very quietly launched a downloadable poker client for Mac – and if you are fast enough, you could pick up a $20.00 bonus for helping test it out.

For years, poker players with a Mac OS have had to put up with the “Instant Play” version of the software if they wanted to play 888Poker on a Mac; but now the company looks as if it has answered the requests of thousands of poker players and produced a Mac compatible downloadable poker client – in beta format at least.

The announcement of the 888Poker for Mac client was made in the Community/Forum pages of the 888 website, where a thread was set up late on Monday evening with a link to a Google Drive page from where players can download the Mac 888Poker zip file (Mac users with a Safari default browser will have to remove the https:// at the beginning of the URL).

The offer of $20.00 for testing out the software applies to players who follow the link to the Google Drive page and submit a screenshot of playing 888Poker on a Mac to the forum thread. The offer is only valid for the first eight screenshots to be posted on the community pages so, in order to take advantage of this instant cash bonus, players who want to play 888Poker on a Mac had better hurry!

The announcement of the Mac beta client was also partly hidden by the marketing for 888Poker´s latest upgrade for mobile devices, which now allows players to compete in multi table tournaments as well as cash games and selected Sit n Gos. The upgrade applies to supported Android and iOS devices and players in the UK who download the latest version of the software will be eligible to claim a seat in a $50,000 freeroll happening next Saturday 24th August.

Qualify for the WSOPE on your Mobile!

With the new tournament support for mobile devices, players can qualify through 888 poker´s Steps program for the WSOPE Main Event at the Casino Barrière Enghien-les-Bains (just outside of Paris) from October 11-24. Players are also being given the opportunity to qualify for other events that will take place during the two-week festival and win packages that include flights, accommodation and the infamous 888Poker parties!

888Poker has also launched a Twitter account in Russian for its growing number of players situated in Eastern Europe. Players can now follow @888poker_ru for the latest news and promotions on 888Poker in their own language – including advance warning of exclusive Twitter follower poker tournaments (English speaking players can still follow @888Poker and should naturally follow @PokerNewsReport!).