Live poker fans have a treat in store at the end of next week, when 888Poker plans to host two “Live Local” events simultaneously in Madrid and Rozvadov. 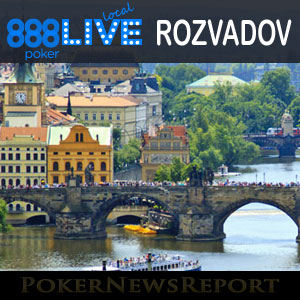 Live poker fans have a treat in store at the end of next week, when 888Poker plans to host two “Live Local” events simultaneously in Madrid and Rozvadov.

Despite next weekend being the climax of [geolink href=”https://www.pokernewsreport.com/one-week-until-start-of-super-xl-series-at-888poker-20910″]888Poker´s Super XL Series[/geolink], poker players in Spain and the Czech Republic are being invited to disengage from their computers and head to either Madrid or Rozvadov to play in a fantastic “Live Local” event.

Although the timing of the “Live Local” events may seem a little unconventional, you have to remember that the ring-fenced market in Spain prevents Spanish players from competing in the Super XL Series – so they were never going to play in the online series anyway.

The Madrid event takes place at the Casino Aranjuez – about 45 Km south of the City Centre. The event starts on Friday September 23 at 6:00pm (Day 1A), with a second opening flight (Day 1B) on Saturday evening and its conclusion on Sunday afternoon.

The tournament has a buy-in of €165.00, and players eliminated before the end of Level 8 have the opportunity to re-enter – but once only. Each level lasts 30 minutes and although the 25,000 chip starting stack may look a little generous, the blind structure is a little aggressive.

The Rozvadov “Live Local” event has a buy-in of €175.00 and a guaranteed prize pool of €100,000. Players get an even more generous starting stack of 30,000 chips and one re-entry is allowed on each Day 1 if you bust out before the end of Level 8 (4 hours) – which is also the end of late registration.

Online satellites are available at [geolink href=”https://www.pokernewsreport.com/888-poker”]888Poker[/geolink] for both events. Players intending to head to Rozvadov should keep an eye out for the daily Live Local Finals that offer a €350 888Live package as a prize. This package includes the €175 buy-in for the Rozvadov Live Local event plus three nights´ accommodation in the four-star Kings Hotel.

Despite the late notice of the Rozvadov event, 888Poker expects it to be well attended. The site is planning on hosting a full-blown 888Live tournament series at the Kings Casino in early 2017, so you can be assured the hospitality and the standard of accommodation will be excellent. The €100,000 guarantee might also a carrot for many local players to try their luck.

If you cannot get away to Spain or the Czech Republic next week, try making it to an 888 Live Local event later in the year. Usually they attract between 100 and 200 players, so not only is the prize money fairly decent, but the environment is much friendlier that you typically find on some of the bigger tours.

Some dates to consider for later in the year include: