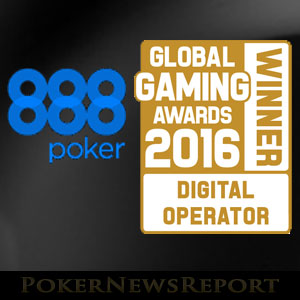 The Global Gaming Expo (G2E) is an annual event that gives service providers to the gaming industry the opportunity to show off their latest innovations. Hundreds of exhibitors and thousands of industry professionals attend the event at the Sands Expo Center in Las Vegas in order to keep up-to-date with what is going on in the industry and for some serious networking.

The opening event of G2E is the Global Gaming Awards, in which companies and individuals within the gaming industry are recognized for their achievements during the previous year. This year´s ceremony took place last Monday in the ballroom of the Venetian Hotel, with twelve awards up for grabs in the land-based and digital gaming sectors.

888Poker is Best Digital Operator of the Year

Undoubtedly the most strongly contested award of the evening was that for Best Digital Operator of the Year. The competition for the award not only included online poker sites such as PokerStars and multi-discipline online gambling sites such as Bet365, but also the two leading Daily Fantasy Sports operators DraftKings and FanDuel.

The destination of the award was determined by a judging panel made up of sixty gaming industry CEO´s and high-profile executives – the panel voting 888Poker the winner of the Best Digital Operator of the Year award for the site´s investment in new campaigns and programs. Announcing the panel´s decision, Gambling Insider Editor Alex Hammond said:

Congratulations to 888, a first Global Gaming Award win for the operator who has made great strides in challenging the dominance of PokerStars in both the US and Europe in the past 12 months, and in the process given the online poker industry a jolt that many believe the industry needs to return to its former glory.

Among the other winners at the Global Gaming Awards ceremony, MGM Resorts won the title of Best Land-Based Operator for the third consecutive year and also picked up a second award for its “M Life” Customer Loyalty Program. IGT also picked up two awards – the first for Casino Product of the Year, and the second for Land-Based Industry Supplier.

Another company to enjoy repeat success was Microgaming, who won the Digital Product of the Year Award for the second time in a row, while Playtech improved on its runner-up position in 2015 to land the title for Digital Industry Supplier.  GeoComply also picked up an award for the company´s work on geolocation technology. The full list of Global Gaming Award winners are:

Land-Based Operator of the Year

Digital Operator of the Year

Casino Product of the Year

Digital Product of the Year

Microgaming for its Quickfire platform

Digital Acquisition Program of the Year

Customer Loyalty Program of the Year

Land-Based Industry Supplier of the Year

IGT for innovation in slot machines

Digital Industry Supplier of the Year

Land-Based Gaming Innovation of the Year

Digital Gaming Innovation of the Year

Responsible Business of the Year

North America Executive of the Year

Now is a Great Time to be Playing at 888Poker

To witness the strides that 888Poker has made in challenging the dominance of PokerStars, you only need to visit the site. This week 888Poker launched a second $1 million “[geolink href=”https://www.pokernewsreport.com/expect-the-unexpected-promotion-returns-to-888poker-20942″]Expect the Unexpected[/geolink]” promotion and is currently hosting online qualifiers for three live poker events in London (October 13-16), Palma (October 21-23) and Marbella (December 9-11).

The site has also moved its rewards program away from being rake-based to make it more accessible for recreational players, and recently introduced a new selection of daily guaranteed poker tournaments to suit all levels of bankroll. New players at 888Poker benefit from an exclusive 100% [geolink href=”https://www.pokernewsreport.com/888-poker-bonus”]first deposit bonus up to $600[/geolink], plus up to $88 free to try the site out (varies according to location).

Visit the site today to find out more about why now is a great time to be playing at 888Poker.