888 Holdings delivered an impressive Q2 financial statement yesterday which indicated that 888Poker is attracting more players despite the global decline. 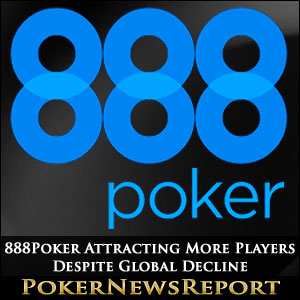 888 Holdings delivered an impressive Q2 financial statement yesterday which indicated that 888Poker is attracting more players despite the global decline.

888Poker´s parent company – 888 Holdings PLC – released its financial statement for the second quarter of 2014 yesterday, which showed year-on-year growth in all the company´s key financial metrics and record revenues for the first half of the year.

The statement revealed that 888 Holdings PLC had generated revenues in Q2 of $111 million – comprised of $95 million from its “Business-2-Customer” operations (online poker, online casino, and online bingo) and $16 million from its “Business-2-Business” operations in the States where its provides online poker platforms for WSOP.com and the All American Poker Network.

The 15% growth in group revenue was particularly impressive considering that it comes at a time when online gaming – particularly online poker – is in a global decline. The latest online poker traffic update shows that the worldwide market is down 8% from this time last year.

Consequently, of particular interest to the online poker market were the figures relating to the company´s poker activities. Poker revenues in Q2 showed a modest year-on-year increase of 2% (up to $23 million) which disguised the fact that 888Poker´s player database had increased by 12% during the period.

The reason for 888Poker´s revenues from online poker failing to increase in line with the growth in its player database is attributable to the site´s focus on recreational players. Many of its promotions during Q2 were targeted to coincide with the World Cup and not the “big buck” poker players, and consequently 888Poker´s “revenue-per-player” fell by 9% over the corresponding period in 2013.

Outside of online poker (which only contributed 20% of 888 Holdings revenue), there was substantial growth in the company´s other online operations. Revenues from 888Casino rose 15% to $53 million, while 888Bingo (which also includes 888Ladies, Wink Bingo, Tasty Bingo and Posh Bingo) showed the biggest percentage rise in “Business-to-Customer” operations of 17% to generate revenues of $12 million.

The most impressive growth percentage was reserved for 888 Holdings´ “Business-to-Business” operations in the States – where the World Series of Poker in Nevada, aggressive marketing and an online poker championship temporarily elevated WSOP.com in Nevada to being the most popular website among those regulated in the US, and pushed revenues up 37% to $16 million.

Commenting on the figures, 888 Holding´s Chief Executive Officer Brian Mattingly said I am pleased to report that 888 has delivered another strong performance in the second quarter which, in combination with our very good start to the year, has once again resulted in record-breaking revenue for H1 (H1 being the first six months of 2014 in which the group generated $225 million in revenues – up from $200 million in 2013).

888Poker is continuing to target recreational players throughout the summer with a selection of social media promotions and potentially lucrative freerolls. The site continues to offer free poker money for players who download the 888Poker software and register an account and regularly updates the poker client to provide one of the best online poker experiences in the world.

[isGeoAllowed room=”888poker”]You can read more about the reasons for 888Poker´s significant growth in our [geolink href=”https://www.pokernewsreport.com/888-poker”]888Poker review[/geolink], or take advantage of our exclusive 888Poker bonus – which offers players up to $200.00 more in bonuses than is advertised on the 888Poker website.[/isGeoAllowed]