888 Poker has seen revenues increase 88 percent year-on-year as it takes a major slice of the Spanish market and looks forward to further growth in the States. 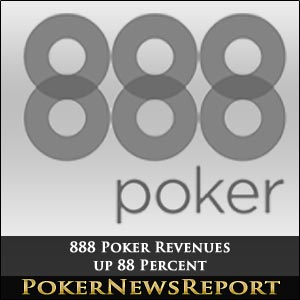 888 Poker has seen revenues increase 88 percent year-on-year as it takes a major slice of the Spanish market and looks forward to further growth in the States.

It was a case of all the eights for 888 Poker, as the company´s revenue in the first quarter of 2012 showed an 88 percent year-on-year increase, prompting investment bankers and stockbrokers – Panmure, Gordon & Co. – to upgrade the company´s profit forecast by a staggering 22 percent.

The company´s growth has been attributed to the shutdown of Full Tilt Poker coinciding with the launch of features intended to attract recreational poker players – such as the player-focused Poker 6 Platform and the popular PokerCams. Other promotional initiatives offered by 888 Poker have also increased its market share, especially the no deposit poker bonus of £5.00/$8.00.

888 Poker Reign in Spain (after PokerStars)

888 Poker is also looking forward to a profitable second half to the year after capturing a quarter of the recently-regulated Spanish market. Although officially the company are adopting the view that they will have to invest significantly to maintain that position (good news for Spanish online poker players!), figures would suggest that 888 Poker is wiping the floor with Bwin.Party (terrible software and worse customer service) and iPoker (who never really bothered turning up).

Furthermore, whereas Bwin.Party were hit with a €33 million fine by the Spanish tax authorities and paid another €10 million to the Germans for sports betting tax, 888 Poker got off relatively lightly by paying “only” €8.7 million to the Spanish taxman and practically nothing to the Germans due to a much smaller presence in Spain prior to regulation and the lack of a substantial sportsbook presence in Germany.

The States Await for 888 Poker

In addition to good times ahead in Spain, the company also has a significant interest in the forthcoming regulation of online poker in the USA – particularly in Nevada, where the company is already in development of a B2B poker business platform for Caesars Interactive and WMS Gaming. If the competition from other interested parties in the US is as ineffective as it has been in Spain (PokerStars excepted), the sky will be the limit for 888 Poker – and those who play on the site!