888 Poker Invites You to Live the Game

888 Poker´s promotion gives players the option of deciding the type of player they are, what kind of missions they want, and how much cash they want to win! 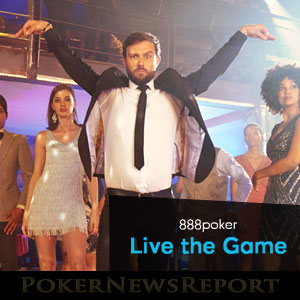 888 Poker´s promotion gives players the option of deciding the type of player they are, what kind of missions they want, and how much cash they want to win!

[geolink href=”https://www.pokernewsreport.com/888-poker”]888 Poker[/geolink]´s latest $1,000,000 promotion has been launched to coincide with a series of “Live the Game” TV adverts – adverts that depict poker players in various scenarios trying to raise their game above the performance of their opponents. They are actually quite entertaining ads, and you can watch them below.

The promotion itself consists of daily tournaments with a range of guaranteed prizes. The choice of which tournament a player competes in is decided by the promotion code they use when making a qualifying deposit. Thereafter, players can win additional seats in future tournaments by competing daily missions.

How to Win in the Live the Game Promo

To get started in the Live the Game promotion, players have to make a qualifying deposit of $10.00 or more using one of the following 888 Poker bonus codes:

Once a player has competed in any of the free tournaments, they will be sent an email advising them of a choice of missions. The missions vary in difficulty depending on the prize on offer and fall into three categories:

There is no limit to how many missions a player can complete or how many tickets a player can win. Even more entries to the Live the Game tournaments can be won in the “Spin it Your Way” promotion, in which players have a choice of two wheels to spin every day they log into their accounts. The promotion and the Live the Game tournaments run until 15th March.

Also running throughout this week is 888 Poker´s XL Super Series. The series kicked off yesterday with the first five tournaments guaranteeing more than half a million dollars in prize money. At least three tournaments take place every day up until Saturday with buy-ins ranging from $5.00 to $1,500.00.

On Sunday, the highlight of the series is the $1,000,000 guaranteed Main Event – a colossal tournament that gets underway at 7:00pm GMT. Naturally the $1,050 buy-in is going to be out of range for many poker players, so 888 Poker is hosting a sub-satellite schedule throughout the week that qualifies players into a 50-seat guaranteed mega-satellite at 4:05pm GMT on Sunday afternoon.

Full details of the XL Super Series and the Live the Game promotion can be found on the 888 Poker website.