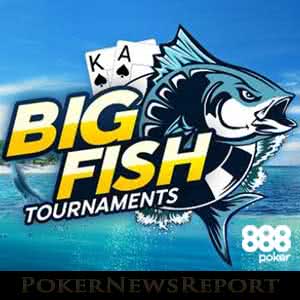 888 Poker has fine-tuned its daily Fish ´N´ Chips tournament schedule by replacing some of the existing menu with new BIG Fish tournaments. The six new tournaments have buy-ins starting at $5.50, guaranteed prize pools totalling $100,000, and are being supported by a very generous satellite schedule.

Within each buy-in, there is a good variety of tournament formats (freezeout, turbo, deepstack, re-buy, etc.) and some decent guaranteed prize pools – sometimes as high as 5,000x the buy-in. Now 888 Poker has selected six of its most popular fish-themed tournaments and re-branded them as a BIG Fish series – slightly increasing the buy-ins, but significantly increasing the guarantees.

The BIG Fish tournaments can be found under a new tab in the 888 Poker tournaments lobby, where the site has also conveniently located the satellites, sub-satellites and freebuy satellites feeding into the target events. Please note that as well as increasing the buy-ins and the guarantees, 888 Poker has also extended the late registration periods for many of the events:

Just in Time for the XL Inferno Series

The start times for the three most valuable BIG Fish tournaments are very close to the start times for the first daily events in 888 Poker´s forthcoming XL Inferno series (which starts next Thursday 10th May). The cynical among us could be forgiven for thinking the previous “Blowfish”, “Catfish” and “Swordfish” tournaments that have been replaced by the BIG Fish tournaments would have generated prize pools similar to those being guaranteed in the rebranded events.

We won´t know for sure whether the guarantees for the BIG Fish tournaments will be maintained until the XL Inferno series comes to a close. However, we will have no hesitation in taking advantage of the opportunities to win a big prize for a small investment while it still exists – especially as 888 Poker is hosting some [geolink href=”https://www.pokernewsreport.com/888-poker-releases-xl-inferno-schedule-and-promotions-22328″]very generous promotions at the minute[/geolink] to support the XL Inferno series. We suggest you head over to 888 Poker as well to take advantage of the opportunities while they still exist.