888 Poker has teamed up with the Treasure Island Hotel and Casino in Las Vegas and plans to launch its online poker offering in Nevada this summer. 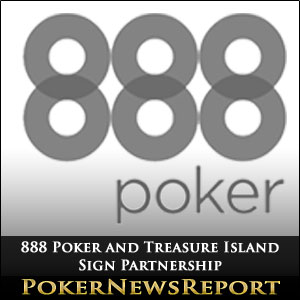 888 Poker has teamed up with the Treasure Island Hotel and Casino in Las Vegas and plans to launch its online poker offering in Nevada this summer.

This is the second such partnership agreement for 888 Poker, who already have a deal in place with Caesars Interactive Entertainment. 888 Poker will provide the poker software for Caesars, one of almost 20 companies who already received license approval from the gaming commission. Caesars has been waiting for Nevada gaming officials to approve 888’s application.

888’s deal with Caesars calls for the launch of a WSOP-branded poker site. Once the regulatory and technical issues are completed, including the location of servers and the various operating licenses used, player pools would be shared among Caesars’ WSOP.com and 888 Poker, with Treasure Island obtaining a share of revenue per their agreement with 888.

Caesars may not be fully committed to 888 over the long haul and may eventually change poker platforms to Barrière, a French supplier. Caesars chief executive Gary Loveman was quoted recently as saying that we might migrate off of the 888 platform and onto the Barrière platform in due time.

Although moving at a slow pace, Nevada continues to lead the way with its online poker regime. If licenses are approved for both Treasure Island and 888 Poker as anticipated, the companies project a June or July launch of online poker in the Silver State. That date would be way ahead of both Delaware and New Jersey, the other two states that have enacted online gambling legislation. Delaware has set an Internet gaming launch date of Sept. 30. New Jersey gaming officials are aiming to have their sites up and running in nine months, which would likely mean sometime in December.