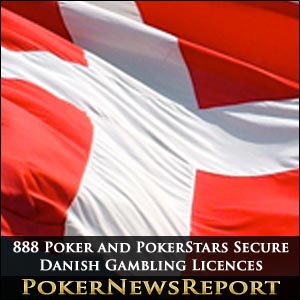 888 Poker and PokerStars are among 38 operators to be given Danish Gambling Authority licences to run online gambling websites in the European country when an “orderly” regulatory framework is introduced on January 1 next year.

Danish minister of taxation Thor Möger Pedersen believes granting these licences should be welcomed by the operators – with many of the biggest names in online poker prominent among the applicants – and the country’s people, with the nation having no current regulations governing online gambling.

However, that will all change in just over two weeks when the new legislation – which was approved this year by the European Commission and Danish parliament – comes into effect, ensuring regulatory controls are in place.

Certainly, the granting of licences will ensure that the government’s coffers show improvement as each of the operators will shell out a 20% tax on gross income from their presence in the online market.

Pedersen said: “From January the gambling market will be orderly and we will ensure that holders of a betting and online casino license to operate on the Danish market also contribute to the society.

“Danes, as well as the many associations supported by the gambling market, can be joyful.”

But Pedersen also had a warning for operators who have failed to secure a licence, hinting strongly that the Danish government will almost certainly follow the US pattern of shutting down gambling websites – as happened back on April 15 when the Department of Justice (DoJ) came down hard on sites such as PokerStars, Full Tilt Poker and Absolute Poker.

He said: “The orderly market means, among other things, that all gambling operators without a licence from 1 January 2012 risk that their website or payments will be blocked.”

The Scandinavian nation is just the latest European country to introduce new online gambling laws, following on from the likes of Germany, France and Spain.

An official press release from Pedersen is listed further down this report.

Meanwhile, Spanish news website Poker-Red has reported that Groupe Bernard Tapie, the French investment company, are among 61 firms to make applications to be awarded online gaming licences from the Spanish government.

Spain’s freshly regulated market comes into effect in January of next year as the applications for licences apparently continue to rise above the five-dozen mark.

It would appear that the investment firm – which seem certain to work out a deal that will see them buy Full Tilt Poker – is prepared to repay all the under-pressure online poker room’s Spanish customers after players’ assets were frozen as a result of the company’s troubles.

This is a requirement that must be met before the poker website can be resurrected in Spain, according to Poker-Red’s report.

The Iberian nation is to enforce laws that will segregate the gambling market, in a similar fashion to Belgium, Italy and France.

While no official applications list has been released, numerous big players in the online gambling market – and again some of the largest online poker rooms in the world – have shown great interest, including the likes of 888, the dominant PokerStars, the UK-based Ladbrokes and bwin.party, ahead of Wednesday’s deadline.

However, Unibet has withdrawn their application, with the firm’s Spanish-language website posting a message that they are to “suspend…activities in Spain on Dec. 20, 2011.”

Although the website’s Spain-based clients will be blocked next Tuesday from wagering and bonuses will be terminated on the same day, customers will still be able to withdraw funds.

But it should be noted that Unibet have only just reappeared on the French online gambling market following a short stint on the sidelines over what has been described as a temporary protest or break – depending on who you listen to – in relation to the compulsory taxes paid by licensees to the French government.

So, there could well be future poker news to report on Unibet’s withdrawal here at Poker News Report after the first round of licences are handed out by Spain.

Back to Scandinavia, and here is the full press release from minister of taxation Thor Möger Pedersen that was originally published at skat.dk, the Danish Tax and Customs Administration (SKAT), which is the government body responsible for collecting taxes and duties:

1 January 2012, Denmark opens for the new gambling market, providing gambling operators the opportunity to offer betting and online casino. A total of 38 applicants have received 55 different licences to legally operate in Denmark.

“From January the gambling market will be orderly and we will ensure that holders of a betting and online casino licence to operate on the Danish market also contribute to the society.

“Danes, as well as the many associations supported by the gambling market, can be joyful.

“The orderly market means, among other things, that all gambling operators without a licence from 1 January 2012 risk that their website or payments will be blocked.

“The new and open gambling market in Denmark has been underway since the Parliament’s decision in 2010.

“On Tuesday next week the Danish Gambling Authority will hold an information session for the new licence holders to inform about upcoming activities on the gambling scene.