888 On The Rise Despite Stagnating British Economy

Internet gaming firm 888 Holdings plc expect their brands to show continued growth this year following an impressive 2011 – even with the British economy struggling through the current recession. 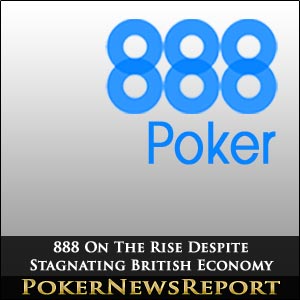 Internet gaming firm 888 Holdings plc expect their brands to show continued growth this year following an impressive 2011 – even with the British economy struggling through the current recession.

The British company – which operates several gambling websites, including poker room [geolink href=”https://www.pokernewsreport.com/888-poker”]888 poker[/geolink] – enjoyed a 26.33% revenue growth last year as customers signed up in droves, as reported by Reuters. 888 also stated that, following their positive 2011, the company continues to see strong growth during the first quarter of this year.

Penny-pinching Brits might be choosing to stay at home more these days as the government’s austerity measures cut into their disposable incomes, but that is good news for the likes of 888 poker as gambling rooms attract more customers – even with the real fear that Britain’s economy will again slide into deeper trouble.

However, 888 Holdings – which also runs bingo, casino and sport rooms – showed a $69 million increase in revenue from the previous year’s $262 million to $331 million.

Additionally, 888 announced that they now have 10.6 million registered customers – up 22% from 2010 – who are playing real money poker, sport, bingo and casino games.

Certainly, 2012 looks like being an even better year for many websites, including 888, as they attempt to break into national monopolies in the USA and Europe while numerous governments consider making changes to laws regarding online poker.

In fact, just last week 888.com and Caesars Interactive Entertainment announced that the business partners are planning to extend their British software licensing agreement to allow them to provide “a real money offering” in the USA.

An Open US Market is the Target

This followed on from Bwin.party Digital Entertainment’s announcement last year that they plan to team up with MGM Resorts International – an American casino operator – and the Boyd Gaming Corporation, who own and run hotels and casinos throughout the US, to supply internet gambling…if the government passes laws that make this possible.

Things are most definitely looking up for gambling websites in Britain and the USA, so it will be very interesting to see how those figures improve – or decline – over the net two months, when the first quarter figures will be revealed.

Still, for now, 888 Holdings’ share price on the London Stock Exchange’s FTSE 100 – a share index of the 100 most highly capitalised UK companies – will start today’s trading at 57.25 pence.

That’s more than double their lowest point last year, so it seems certain that 888 will continue to be a good long-term speculation for anyone who still somehow possesses any spare cash to invest.