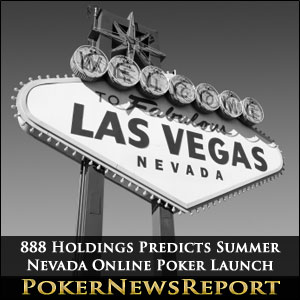 Speaking to Reuters this week, the Chief Executive Officer of the London listed 888 Holdings, Brian Mattingley, said that it is waiting for its software to be approved by the Nevada Gaming Control Board.  As soon as this happens, said Mattingley, players will be able to access 888 poker products through three online gambling partners.

888 software will be used by Caesars Interactive Entertainment, which also owns the World Series of Poker brand.  The group also has an alliance with Treasure Island and WMS Industries, the leading slot machine manufacturer.

The CEO said that 888 was awaiting final sign off by the Nevada authorities, and he hoped that the software would go live by the third quarter of 2013.

Boost to US Online Poker from 2015

Asked about his predictions for the US online poker industry as a whole, Brian Mattingley said that he believed that influential numbers would be felt from 2015. He said that 2014 would be a year that we would see many companies fighting for their place in the growing US market through major marketing campaigns. The fruits would be felt the following year, he said.

The CEO said that it was only a matter of time that more states would start to offer online gambling entertainment to their residents. He believed that this would happen sooner rather than later as states realize the huge tax benefits to their dwindling coffers.

Speaking about 888’s performance elsewhere around the world, Mattingley said that the group had seen strong growth in revenues from its Spanish and Italian interests, with a 9% increase to $103 million in the first three months of 2013. The Italian government’s decision to allow online slot games positively impacted 88’s numbers, and Mattingley said that he hoped that the Spanish authorities would do the same.

888 Holdings plans to offer online sports betting in both companies this year.