While many in the online gaming industry are focused on the upcoming launch in New Jersey in November, 888 Holdings is looking even further. 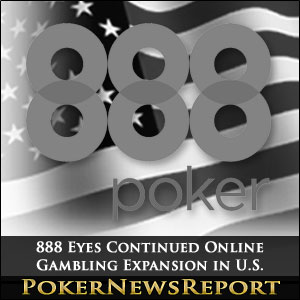 While many in the online gaming industry are focused on the upcoming launch in New Jersey in November, 888 Holdings is looking even further.

Primarily operating in Europe and the UK, 888 has been absent from the U.S. market since the Bush administration tacked the UIGEA onto another bill that was passed into law in 2006. But with individual U.S. states slowly regulating Internet gambling, 888 is readying itself for a triumphant return.

Partnered with Caesars Entertainment, 888 will likely be a presence in at least two of the four New Jersey casinos that Caesars operates under the names of Bally, Harrah’s, Showboat, and of course, Caesars. Across the country in Nevada, 888 will provide software for the online launch of the Caesars-branded WSOP.com that has been slightly delayed by regulatory issues but should occur before too many more monthly calendar pages are overturned.

Over in Delaware, that state’s online gambling launch has been delayed until at least late October. But 888 is firmly entrenched in that regime as the primary vendor in a partnership with Williams Interactive and the Scientific Games Corporation. Though Delaware is a tiny state with less than 1 million residents, being part of the chosen consortium that will lead the way will likely result in considerable revenue numbers for 888 Holdings.

While 888 will be a major player in the three states that have already enacted various forms of online gambling legislation, 888 CEO Brian Mattingley has his eyes on a bigger prize and recently told The Telegraph that nine additional states are considering Internet gaming regulations as well. Mattingley has specifically targeted Florida, New York and California as states that are being watched closely. Adding New Jersey to the mix, those four states would make up more than 50% of the potential U.S. market.

It’s apparent that 888 Holdings will be a major player in U.S. online gambling. The company has its reach in each state that permits Internet wagering thus far and will likely also grab a hold in other states that eventually regulate online gaming in the future.