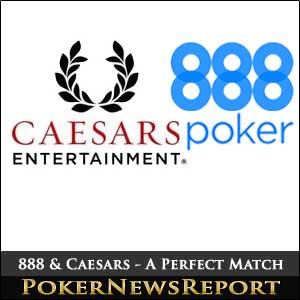 Just after the announcement that revenues of 888 Poker where showing massive growth Bloomberg News reported that 888 is in negotiations with Caesars Entertainment Group, the biggest gambling concern in the world. The talks, which were reported to be going well, focused on 888 signing a deal with Caesars to offer online poker in the U.S. market if and when the law is changed.

Although many off shore poker rooms had been extremely in the U.S., when the FBI took down three major poker rooms on April 15, 2010, many companies got out of the U.S. game. The loss of American players has been huge for many online poker rooms and with announcements that online poker may soon be legal in the United States and that online U.S. connected companies will be allowed in the game for at least the first two years, some off-shore poker rooms have been looking for a way to exploit the possible legislation.

The Caesars connection made total sense for 888 since in 2009 the online company received a license in the state of Nevada to provide Caesars with gaming software. The talks this past week seemed to be a natural outgrowth of both that connection and the events that occurred on April 15, 2011.

Caesars, which has been a major player on the Vegas Strip for as long as anyone can remember, has five locations in Las Vegas, Louisiana, Atlantic City, Lake Tahoe and Tunica. The Vegas location is known for great entertainment, high rollers and a whole lot of gaming opportunities.

The April 15, 2011 raid by the Feds focused specifically on poker rooms and did not target casinos or sportsbooks. The Barton Bill, which was introduced by Republican Joe Barton of Texas and which appears to have the most promise being passed, focuses only on legalising online poker. The number of online poker players in the U.S. is huge, thus, any foothold an offshore company can gain could prove to be beneficial in a major manner.

Deputy Chairman of 888 Brian Mattingley admitted that the company’s talks with Caesars Entertainment were in “advanced stages” and that a final decision on the possible partnership would be made by 888 in the autumn. Mattingley admitted that 888 has a major interest in making the endeavor work out. And it would happen quickly due to the fact that Nevada already passed a law in June that Internet poker would be legal in the state if and when the Federal law is passed.

Match Made in Land-based and Internet Heaven

The joining of forces between growing 888 Poker and the awesomely powerful Caesars would be truly amazing, with the potential to make 888 Poker the most powerful online poker broker in the new U.S. market. Major changes could be underway for these two mighty forces and for the [geolink href=”https://www.pokernewsreport.com/us-poker-sites”]online poker in the U.S[/geolink]. That is if Congress ever does finally pass a law allowing poker rooms to operate and poker players to play online in the U.S. free from worry and fear. That will be the biggest poker news of the decade.