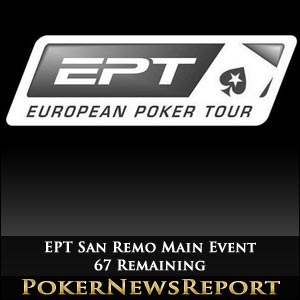 Just four levels of play took place at the Casino San Remo on Day 3 of the EPT Main Event, but it was enough for Inge Forsmo to cement his lead at the top of the leaderboard. Challengers came and went as the bubble burst relatively early in the day – remarkably after three shoves with pocket Aces all held – but at the end of the day Forsmo had amassed over a million chips and is fifty big blinds clear of his nearest rivals – Italians Angelo Recchia (851,000 chips) and Carmelo Vasta (844,000 chips).

Forsmo Takes It Easy Through Bubble

Forsmo admitted in an interview with PokerStars that he had the best table to be on during bubble play,  seated among players with no more than 20 big blinds each who were anxious to hold onto their chips to make a min-cash if at all possible. Forsmo said that he was raising every hand – often without looking at his cards – and wished that the bubble could last three or four hours longer. For a player who acknowledges that he has little patience, he was quite happy with the “tanking” that has been heavily criticised at this event all the time he was safe from any threat to his chip lead.

One player who did temporarily take the chip lead from Forsmo in the last level of the day was Isaac Haxton. The American stacked up nicely when hitting a straight flush to eliminate Simone Petrini in 77th place but he could not resist the temptation of calling Eric Nhouyvanisvong´s 375,000 chip shove in the last hand of the day when holding A♦ K♦ on a board of Q♥ 7♦ 4♦. Unfortunately for Haxton, the board blanked and Nhouyvanisvong (Q♣ Q♠) chipped up nicely to finish the day in fourth.

It was a bad day for PokerStars Pros – with Andre Akkari and Jude Ainsworth busting out before the money and Liv Boeree, Chris Moneymaker and Ana Marquez just squeezing min cashes – but plenty of top poker players still remain in contention for the EPT San Remo Main Event as it enters Day 4. Jason Tompkins (nominated for Best Tournament Player in the Irish Poker Awards) and David Vamplew sit comfortably within the top ten chip counts while American poker players Justin Bonomo and Shaun Deeb hover with chip stacks around the average of 362,273.