5 Things We Learned from the AGCC Revocation

The AGCC Notice of Determination which revoked Full Tilt Poker´s operating licence did not hold many surprises. However, some aspects of the Full Tilt Poker saga have taught us one or two things about online poker and life in general. 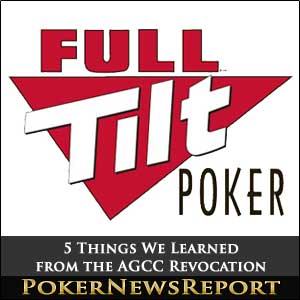 The AGCC Notice of Determination which revoked Full Tilt Poker´s operating licence did not hold many surprises.

Many of the reasons for “permanently” withdrawing licenses for Vantage Limited, Filco Limited and Oxalic Limited were already assumed – the companies were broke due to (alleged) massive fraud and Full Tilt Poker had lied to their players and the AGCC all along.

However, some aspects of the Full Tilt Poker saga have taught us one or two things about online poker and life in general.

1- The AGCC Failed the Players

As the regulator of a company supposedly holding hundreds of millions of dollars in player funds, the AGCC were “unaware” until now that the US Department of Justice had seized $331 million over a four year period since 2007. Full Tilt Poker had accounted for these seized funds as liquid assets which were available to be withdrawn by players with 24 hours notice but, with closer (adequate) scrutiny, the AGCC could have prevented the current situation by acting many years ago.

2 – The Full Tilt Poker Directors Blame Everybody but Themselves

Statements issued by representatives of the company have either contained no news or have chosen to blame other entities for their shortcomings. Had the DoJ not have seized $331 million over the four year period, who is to say that the money would be available now for players to withdraw – such was the extravagant lifestyle led by the directors of Full Tilt Poker.

3 – Hail Mary´s Only Work for the Righteous

Full Tilt Poker´s legal representative – Jeff Ifrah – orchestrated a plea for ex-Full Tilt Poker players to inundate the AGCC with emails asking for an extended suspension of the licence. The lawyer described the mass call to action as a “Hail Mary” call – claiming that should the licence be revoked, it would spell the end of any possible investor takeover. Even though his prayers were not answered, the door remains open for the (alleged) investor to conclude his transaction and repay all the players.

One thing we have definitely learned about Full Tilt Poker is that is they were a poker player you would win tons of money from them (but never get paid). Their “tells” are becoming so predictable that even a fish playing Rush Poker would have a profitable session from them. The only “news” coming from Full Tilt Poker was in their statement yesterday, in which they condemned the AGCC for potentially damaging negotiations with their current secret investor – something which had been predicted last week when Jeff Ifrah (above) was on his knees praying for his legal bills to get paid.

The “news” that has actually occurred in the past two weeks is that the AGCC revoked Full Tilt Poker´s operating licence, but Full Tilt Poker is still continuing negotiations with an investor (the investor is due to meet with representatives of the DoJ next week). The news which has been written about the “news” has been covered by the BBC, Wall Street Journal, Christian Science Monitor (!) and even the Pakistan Daily Times – who gave more page space to a story about Fulham FC, which really puts the whole level of newsworthy coverage into perspective!