888Poker has announced its most valuable Super XL Series yet will start on 19th January and have sixty-four events guaranteeing $5 million in prize money. 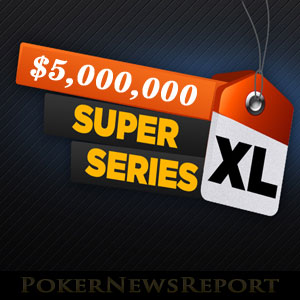 888Poker has announced its most valuable Super XL Series yet will start on 19th January and have sixty-four events guaranteeing $5 million in prize money.

Super XL VII promises to be the biggest tournament series ever hosted by [geolink href=”https://www.pokernewsreport.com/888-poker”]888Poker[/geolink]. There will be sixty-four events played over eleven days, guaranteeing $5 million in prize money plus the opportunity for one lucky player to win a WSOP Main Event package in a Super XL Champion of Champions event.

The action kicks off on Thursday 19th January with three “Opening Events” at different buy-in levels to accommodate players of all bankrolls. The series continues in a variety of formats and disciplines until Sunday 29th January, when the $1,500,000 guaranteed Super XL Main Event is the feature event.

Throughout the series, players who cash in any Super XL event will earn points for a leaderboard competition. The top fifty players on the leaderboard at the end of the series will win prizes, while the top eighteen will be invited to compete in the Super XL Champion of Champions event on January 31.

Although heavily reliant on its existing schedule, January´s Super XL Series has plenty of variety and a good mixture of buy-ins from $5 to $2,100. Highlights of the first weekend include 888Poker´s legendary “Crazy 8” tournament, a $600 buy-in “Whale” event guaranteeing $200,000, and a Mega-Satellite to the Main Event guaranteeing fifteen seats.

In the week leading up to the series´ climax there are Omaha tournaments, SNAP Poker tournaments and Knockout tournaments scheduled – although strangely no BLAST tournaments – and a further Mega-Satellite to the Main Event guaranteeing fifty seats into the target tournament.

The main action concludes with five “Main Events” that have buy-ins from $5 to $1,050, plus a Sunday Challenge that has a $100,000 guarantee for a buy-in of just $90. Overall there should be something for everyone in the Super XL Series, and some serious opportunities to win some serious money.

Win a Trip to Vegas in the Champion of Champions Event

As mentioned above, the eighteen players who finish in the top positions on the Super XL leaderboard will be invited to take part in a Champion of Champions tournament on Tuesday 31st January. The winner of the tournament will win a $12,000 WSOP Main Event package, and there are valuable prizes for each player that takes part in the event:

Plenty of top names in the online poker world are expected to take a shot at winning the WSOP Main Event package. Dominik Nitsche has already declared his intention to play in every high buy-in event and live-stream his action on Twitch. Other players we assume will be aiming for a high leaderboard position include 888Poker ambassadors Chris Moorman, Sofia Lovgren and Kara Scott.

888Poker is giving players the opportunity to win free seats in Super XL events via daily freeroll tournaments. Each existing player registered at 888Poker should receive two freeroll entry ticket via email, with further freeroll entry tickets available for players who complete daily challenges. The freerolls have already started at 888Poker, so make sure you check your email inbox for further details of this opportunity.

If you are not already playing at 888Poker, you can register an account today and receive your freeroll tickets after making your first deposit. If you register your account using our links, you will also receive up to $88 in free poker money (the value of this offer depends on your location) and be eligible for an exclusive 100% match bonus up to $600. Plus you will be able to play in the $5 million Super XL Series coming to 888Poker next month.