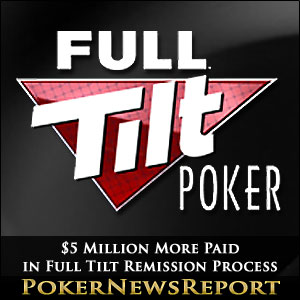 Garden City Group (GCG) updated the official website on April 1 and revealed that 2,200 players who had previously been approved for payment but had incorrect banking information during the first wave of payments on February 28 have now been made whole. Counting the $76 million dispensed on Green Friday and the $5 million from the latest payout, $81 million has landed in the pockets of U.S. Full Tilt players in just over a month.

According to the FullTiltPokerClaims.com website, players who were approved but failed to supply the GCG with the proper bank account information will be receiving a check at the mailing address provided and not via ACH. It is not fully known how many players will receive payment via that method, but an overwhelming majority of reimbursements were done through bank transfers.

The GCG also reminds players on the latest update that those who received notice of an outstanding debt to be collected by the Treasury Offset Program need to complete and return the Unified Financial Management System Vendor Request Form as quickly as possible.

Still awaiting payment are players whose claims are in dispute with the account balance on record at the GCG, as well as those who had previously been labeled as affiliates and pros. Affiliates had a deadline of March 2 to submit their claims.

The GCG provided no further information on when the next wave of payments may be forthcoming. Announcements regarding further reimbursement are expected in due course.

After a shaky start to the Full Tilt remission process last year in which a number of posters at online poker forums questioned the competency of the GCG, reimbursement is now seemingly running like a well-oiled machine. The GCG provides regular updates at the official website and the lines of communication remain open for those who feel the need to speak to a claims administrator representative regarding their petition.

Two weeks from now will mark the third anniversary of Black Friday, a day that changed the course of online poker history in the U.S. Since that time, the Wire Act has been re-clarified, paving the way for the spread of regulated online poker, albeit slowly.