According to Poker Players Alliance Executive Director John Pappas, approximately 30,000 US Full Tilt Poker Claims have been approved for payment by the DoJ. 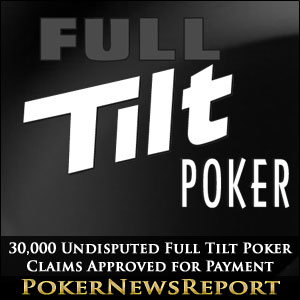 According to Poker Players Alliance Executive Director John Pappas, approximately 30,000 US Full Tilt Poker Claims have been approved for payment by the DoJ.

Last night the Twittersphere came alight after Pappas posted the news that the US Department of Justice had completed its audit of player petitions processed by the Garden City Group and had approved the release of $82 million in funds to approximately 30,000 former Full Tilt Poker players.

The payments will be paid in the near future (in advance of the March 31 deadline) for all undisputed Full Tilt Poker claims, and players expecting the refund of their Full Tilt Poker bankrolls should be on the look-out for an email from the Garden City Group with instructions on how to receive their payment within the next few weeks.

As the news broke, players rushed to the popular 2+2 poker forum to raise questions and to generally celebrate. The biggest issue was how players would know whether their claims were undisputed or not, and John Pappas wrote an extended reply on the site which elaborated on the news he had tweeted.

Unfortunately it would appear that if former Full Tilt Poker players do not received an email from the Garden City Group, they can assume that their claim is still in dispute and will not be resolved until the current round of payments are made:

There is still not a timeline for disputed claims that were filed by the deadline. They [Garden City Group] are still working on those and hope more info will be available once the undisputed funds are released. FTP players who for some reason have still not filed a claim can still do it and those claims will be considered.

Pappas stated that some (not a significant number) Full Tilt Poker claims were filed incompletely or incorrectly. He said that affected individuals would receive an email regarding the issues with their claim in order that any missing information could be submitted, and payment made as quickly as possible.

He also answered questions regarding payments to former affiliates and Full Tilt Poker-sponsored professionals who were owed money; writing that the issue was still unresolved, but that the Department of Justice and Garden City Group are still looking into the matter and a further announcement was expected soon.

When pressed about how long it might take for players to receive their funds, Pappas wrote:

The DoJ audited and approved the claims collected by GCG. The onus is now on GCG to remit the funds to players. I don’t know their payment process and it very well could be days, not weeks.

On April 20th 2011 – five days after federal authorities unsealed an indictment against Full Tilt Poker – an agreement was reached with the DoJ that allowed the company to use its .com URL to facilitate the repayment of players´ bankrolls. At the time, Full Tilt Poker released the following statement:

The agreement represents an important first step towards returning funds to U.S. players because it allows Full Tilt Poker to utilize its domain to facilitate the withdrawal of player funds. But, unfortunately, there remain significant practical and legal impediments to returning funds to players in the immediate future.

As a result of the recent enforcement action, there exists no authorized U.S. payment channel through which to make refunds; Full Tilt Poker has no accounting of the millions of dollars of player funds that were seized by the government; and the government has not agreed to permit any of the seized player funds to be returned to the players.

What followed thereafter is well-chronicled history, and thankfully it would appear that the days/months/years of waiting for the return of their poker bankrolls is finally coming to an end for thousands of former US Full Tilt Poker players.